Paintgrapher Juliet
BY TAJUDEEN SOWOLE
Sunday, 17 July 2011 00:00
FIRST made public during the last International Art Expo held at National Museum, Onikan, Lagos, Juliet Ezenwa-Pearce’s latest offering, Paintergraph, a combination of painting and printmaking, will be officially launched at a show in Kings Theatre, Portsmouth, UK, on July 29.
Describing it as Paintergraph, she says, “my latest is the place where visual arts meet applied arts.”
Some of the works available in soft copies will raise curiosity aside from stirring up debates, particularly now that there is wide experimentation of form by artists.
For example, Everyday Life, contextually, is a print, on which the artist renders sculptural as well as painterly forms.
The images, which perhaps, depict man’s survival techniques, also explain the flexibility of the artist’s new form as the composition shows abstractive and impressionistic rendition.
In another work, an assemblage titled New Masquerade, Juliet deploys sculptural technique to achieve a figural image with limbs.
Indeed, she has boldly escaped into adventurism, blending the genres into one. She says, it’s a journey of more than eight years, aimed at blending mixed media, installation, painting, sculpture and, recently, printmaking. This adventure, she adds, leads me to introduce mirrors into my mixed-media painting.
This was noticed in her past shows such as Reflections (2004) and Moonlight Rhapsody (2003)

PAINTERGRAPGH, Juliet stresses, is not entirely strange, “it‘s primarily a printmaking plate using the collagraph method, but with mirrors, sculptural, ceramic pieces or any other object installed.”
Painting on this with traditional printing materials and methods and then presented as a visual art piece,” she says completes the Paintergraph.
Indeed, it’s not new arriving at a particular form of art, as this is common among artists. However, very few artists are bold enough to express such in public; Juliet has both. She felt the pulse of the art community on this new media when she showed the plates at the 2010 Lagos International Art Expo. With works such as Bridesmaids, Everyday Life, New Masquerade and Yemoja on display at the expo, she got quite an attention. Many questions were asked, but when the price tag on each of the works was as high as N1.8 million, the artist drew greater attention than before. “My only explanation was that they were primarily printmaking plates on which I had never taken a print from.” 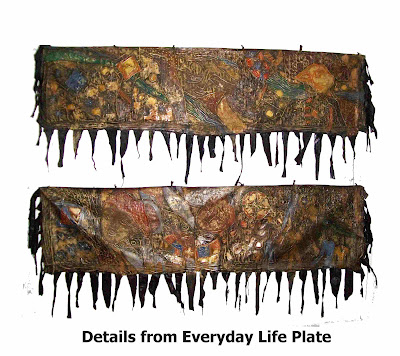 HOWEVER, she did not have to bother about who collected or did not, as one of the works, Bridesmaids, was acquired as national collection by the National Gallery of Art (NGA).
At the last yearly art event, Harmattan Workshop, in Agbar Otor, Delta State, she supervised the printmaking section. That was a continuation of her presence at the event since 2005. “Then, I was introduced to printmaking as an art form. Before then I knew printmaking as a branch of the graphic arts. With the encouragement of Dr. Bruce Onobrakpeya, I began to bravely embrace the experimental nature of it.”
at September 09, 2011