By Tajudeen Sowole
Visibility and perception are too main factors that shape the shades and lights of Lagos's highly competitive art landscape. For some artists, pushing their works through the windows of exhibitions and art gallery connections, is not exactly enough; regular visits to  art events and creating personal visibility to germinate strong relationship with art collectors, connoisseurs and aficionados is as crucial as the creative part of creating the work.
However there are quite a few artists based outside Lagos, whose physical presence in the city are as irregular as the the total lunar eclipse, yet these artists' works are not less visible or appreciated as their counterparts who live and work in the city. Among such artists is portraitist, Ebenezer Akinola b.1968 whose kind of portrait painting carries a distinct texture not exactly common in this part of the world.

Based in Ibadan, Oyo State, Akinola's work is easily recognised more than his face. In fact, I recall having come across his works for more than two years before I finally met the face behind the canvas. For artists like Akinola, perhaps being a little bit elusive is an advantage in avoiding distraction from studio commitment. In fact, hoping to track him in Lagos during one of his sneaking in and out of the city has been impossible. To resolve an a lingering chat appointment, he humbly offers to “come to Lagos." Coming all the way from Ibadan, just for a chat? E-chat was eventually agreed.

For artists who are based outside a hub-city like Lagos, e-windows such as the social media should be an ideal opportunity. And when it comes to marketing, one would expect that the social media outlets provide a relief for the likes of Akinola. In fact, many activities are the trend by artists via social media, particularly on facebook, where artists post their new works. For some artists, this is an alternative to physical art exhibition space. Is the social media being misused or overrated by artists? What are the advantages and disadvantages of posting works of art on social media? Akinola takes a practical perspective into the trend. "It is a social media and not a 'business media," he says emphatically, noting that the unspecified functions of the medium makes it such that it is opened to all comers. The window is a double-edged sword that could, at the end of the day serve a purpose, he argues. "The social media is well used, misused and overrated. The circle of friends you belong to is important. It serves as a form of exhibition but presently it has not taken the place of the physical exhibition. This may be possible in the future, who knows."

A flip side to it, he warns, encourages plagiarism. "People also get a little personal with you. One major problem is that young people copy your works, so such danger may discourage me  from posting new works on facebook."  Beyond mere interaction among colleague artists, sometimes one wonders how far the posting of works on social media go. If the purpose is market strategy, Akinola is not impressed. In fact, he argues that it is not the right window. "Most people who see your works are the wrong people; not the type that appreciate art. The facebook especially is not the media for 'serious' art, presently."
As the social media presents its challenges, so is the widening gab between moderni and contemporary art. In fact, there is so much energy around art such that traditional renditions of painting on canvas - as resilient as it has been over the centuries - is beginning to shed its weight. How long can painting on canvas and traditional sculpture withstand the future in contemporary African art space? "I am open minded when it comes to art. There is plenty of room." Cautious in his prediction, Akinola suggests an  "evolution" that "may be absolute, perhaps within its kind or it may not fully come.". He also agrees that traditional rendition in creating art has never been challenged as the current state reflects. "This era looks to me like a melting point of different kinds of art." Artists, he warns, should be honest to their natural callings.  "History is still being made so the artist should remain true to his art and be open minded."

Being flexible is perhaps one of the virtues he picked as a Diaspora artist, shortly before he returned to Nigeria in over ten years ago. Recalling his experience, Akinola says his first encounter was realising the different space of art environment he found himself. For instance, he discloses how the 'public art' phrase confronted him, perhaps for the first time. "People generally appreciate the art and the artist even when they don't have the money to pay for it. I saw how the museum was very useful in the development of art. People would line up and pay to enter the museum even when it was snowing." 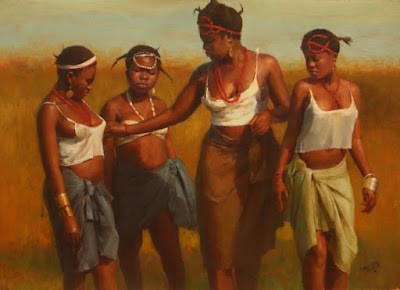 The high level of public art appreciation also translates into the attention that individual artists are given, thus making art as a profession and a career worth living on, Akinola explains. However, the prize to pay for what he describes as "art of survival" was not encouraging in creative context. "For survival, most times I had to do what the people wanted. I was tutored on what to do to get my works sold." Submission of his creative independence was, in his thought, not sustainable, so he had to come back to Nigeria. "Relatively my art was received and i didn't have much problem selling them. The only thing that discouraged me was doing the art of survival. I wasn't doing what I wanted to do. I figured out that if I was relevant at home doing what I wanted, it would be better for me." Comparatively, Nigerian artists, he argues, "are strong when you look at the African American artists."

Last year, Akinola's art returned to the west, this time in the U.K, courtesy of his membership of Guild of Professional Fine Artists of Nigeria (GFA). It was a tour exhibition titled Transcending Boundaries, being promoted by a U.K-based outlet, Abru Art.
Being among new members of GFA, the attraction to him is the quality of artists in the guild. "I saw people who were professionally minded. I saw people who want to make things happen. I've known these people over the years and have seen the passion and sacrifice they have put into art. Seriously, art is sacrifice."

Clearly, the Nigerian art market is growing. But are artists adjusting or growing with the expansion? For example, Nigerian artists appear not ready for galleries to represent them as it is done in climes where art market has is properly developed. "The local art market is growing, but in its teething stage. Generally, the artists are taking advantage of this change." Gallery representation of artists in Nigeria appears like a good prospect that is slowed by galleries' inability to adequate finance.  "Whether fully or partial representation, it will need a lot of money and certain laws will have to be passed." He also note that the galleries are too few "to handle representation the way it should be properly done."

Akinola Studied Fine Art And Graduated in 1989 at the University Of Benin with B.A in Painting Major.