By Tajudeen Sowole
GRADUALLY, the dream of creating a partnership between art and polo for the promotion of creative enterprise is becoming a reality. It’s a concept that started about a year ago with a show, which featured works of renowned designer, Deola Sagoe, inside the Lagos Polo Club.
And having built on the success of that debut and won the attention of both established and new art enthusiasts, via several other art exhibitions, the lady behind the concept, a finance analyst and business partner of a London-based group, Omowunmi Awomolo appears satisfied that the culture of art collecting is spreading beyond the regular art gallery tradition.
Also, the ultimate goal of taking art out of the regular gallery, she explained, is to partner with foreign investors and penetrate the international art market.
For the January edition of the club’s Happy Hour, the show tagged Salon Art Series-1, which ends last week of February, added a creative touch to the Lagos Polo Club ambience.
Among artists whose works were on display are Nobert Okpu, Nelson Okoh and Andrew Ikechukwu Emueze.
From Okpu’s abstract impressionism to Nelson’s portraiture rendition and Emueze’s figural, Salon Art Series-I offers fresh breath of creative mix. The piece, simply titled, She, a drawing work of Emueze, for example, which the artist described as “a dedication to womanhood, to my mother,” reveals an artist, whose style in portraiture emphasizes light, and less lines. 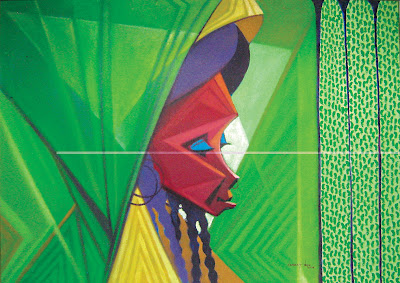 From another work by the same artist comes Not Alone, a respite for hopelessness. Emueze noted, “no matter the emptiness of forms, of activities around us, life can still be colourful if we look within.”
Art outside the regular gallery space, according to Awomolo, has always been her focus while in the U.K. And when she decided to return home “to contribute to the economy of Nigeria, I find the Lagos art scene very worthy to start from.”
Next month, the Art Salon Series, she disclosed, “continues at the Lagos Polo Club.”
As growing and prospective visual art is in Nigeria, Lagos in particular, the existing regular and established art galleries appear to have formed a clique that may be difficult to penetrate. How does Awomolo hope to break into this small, but strong art market?
“It’s a triangle formula: venue, artist and the people,” she stated softly. It’s about bringing over 10 years of working in the finance industry in the U.K. as a template for Nigeria’s evolving art market, she added.
Awomolo noted that “there are people who would like to buy art, but are not really conscious of collecting until you take it to them.”
From London-based finance management group, New Frontiers Capital (NFC), she and her partner have created New Frontiers Galleria (NFG) and brought the concept of mobile art gallery to Nigeria, few years ago.
She noted that the growing interest in the economy of Africa, from around the world is equally boosting interest in the people’s culture and contemporary art.
“NFC is keen in promoting business in Africa, so we see art as a veritable aspect of this mission.”  From the perspective of most business travelers, African art, Awomolo argued, is viewed in the context of mass production, hawked at international airports and tour destinations in the continent. This, she assured, will change as NFC is taking art along in its corporate focus across the world.
With this strategy, she hoped the door for African artists to penetrate the art market of the west would be open. “African art lacks the natural outlets, NFC aims to fill this gap, hoping to provide a platform for artists,” she insisted.
“NFC is basically set up to promote business in Africa, by engaging specialists to source partners in the U.K, seek new areas for growth and bring together interests across the board.”
at February 04, 2012