With Cycle of Life, Lagos museum gets a new beginning
By Tajudeen Sowole
When the National Commission for Museums and Monuments (NCMM) and Ford Foundation last week opened the exhibition Nigerian Art in the Cycle of Life project, at the National Museum, Onikan, Lagos, it was an affirmation that indeed All is Not Lost.


Ford Foundation Vice President on Education, Creativity and Free Expression, Darren Walker noted that the “unique feature of Nigerian culture is most manifest in the collections of the museum.”


On the progress made since 2009, Director-General of NCMM, Mallam Yusuf Abdallah Usman disclosed that the conservation laboratory to be built by Ford Foundation at the Onikan museum “which will serve as a facility for the conservation and restoration of our works of art as well as a training centre for conservators is scheduled to start by the end of the year.”


Given the lack of space to exhibit the collections of the Lagos museum-most of which are always in storage-expanding the gallery was crucial, the Minister of Tourism, Culture and National Orientation, Chief Edem Duke stressed. He noted that since the launch of the collaboration with Lagos museum, Ford Foundation “has provided resources to improve the infrastructural facilities of the museum, including provision for training of the staff.”


While commending the Foundation for its assistance, the minister stressed that the days when government alone funded the culture sector “are fast coming to an end.”


He argued that the NCMM, particularly, needs support from more organisations, given the vastness of its commitment across the country. “I would like to use this opportunity to galvanise support for the NCMM by imploring more organisations and corporate bodies to collaborate with them in their task of preserving and promoting Nigeria’s cultural heritage.”


He noted that with as much as over 36 museums of the NCMM and 65 national monuments all over the country, managing such treasures “could do with additional supports.”


And as the Acting Curator of the museum, Mrs Victoria Agili led visitors through the exhibits, the urgency of delivering the exhibition on scheduled date, which she had earlier explained, could be felt as the odour of paint was in the air, inside the gallery. 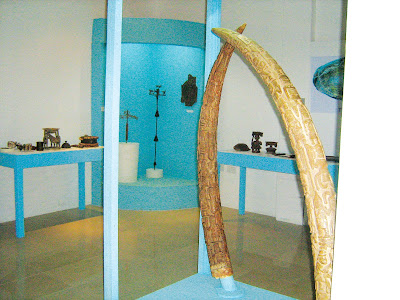 However, efforts of Agili and her team appeared to have blurred whatever shortcoming arose from the hurried approach. The conceptual depth of the theme, Nigerian Art in the Cycle of Life was engaging in the segmentation of the exhibits. Despite the non-availability of a catalogue, for example, the curatorial contents and pattern, makes up for easy guide through the works.


The segments include: Fertility and Birth, Initiation, Adult Life, Wisdom and Learning, Death, Burial and Funeral, Reincarnation and External Influence. These collections offer a rich knowledge about diverse cultural and spirituality of life across beliefs-from birth to death.


From the Death, Burial and Funeral section, a text attached to the entrance explains that among the Yala people, north of Cross River State, dead chiefs are wrapped with royal cloth. And there appears to be a similarity between the people and the Yoruba of the South West in the cultural, and spiritual stet of burying victims of accidents. ‘Accident death are buried in the bush, while among the Yoruba, drowned victims are buried by the river bank.’


The educational significance of Nigerian Art in the Cycle of Life would, however be better appreciated whenever its catalogue is ready for public circulation.


Quietly, a lot of changes have been going on inside the museum since Ford Foundation announced the collaboration. Several weeks ahead of this exhibition, Agili, during a chat, disclosed that the Foundation’s “assistance has enabled us modernise and convert certain portions of our office to a computer laboratory for the training of staff on the computerised documentation of collections.” The computer lab, she explained, is for capacity building in documentation to replace the analogue system.