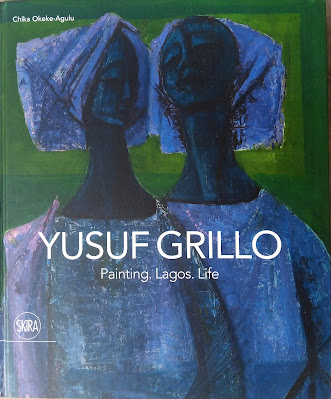 RECALLING that his interest in the artist dated back to 1990, the author of Yusuf Grillo Painting. Lagos. Life, Chika Okeke-Agulu hovered his research over the artist's studio works, paintings specifically. The book highlighted the Lagos and Yoruba influences on Grillo's themes, from which the author generated the title of the book.

Published in 2020, in Italy, by Skira, roughly a year before the death of Grillo, the book came as a monograhical coincidence for the late artist, who, previously, did not enjoy as much documentation, in book form, as enriched in 'Yusuf Grillo Painting. Lagos. Life'. A book of such depth could not have come at a better time than on the 'eve' of any artist's death; quite a coincidence.

The Acknowledgement page disclosed how research on the book started as part of preparation for Grillo's solo exhibition, 'Igi Arabia', shown in Lagos, in 2019. Okeke-Agulu thanked Mrs Kavita Chellaram, CEO of Arthouse Contemporary and her staff, "especially Nana Sonoiki," for what he described as "many years of logistical, financial, and research support," that made the book a reality. Quite a list of others such as  Sinmidele Adesanya of Mydrim Gallery,  Giles Peppiatt at Bonhams, and artist Kolade Oshinowo, among others were mentioned in the acknowledgement page for their supports.

For an artist like Grillo, whose studio and commissioned paintings as well as sculptures  epitomise elaborate visual contents, Okeke-Agulu's monograph of 166 pages has represented the late artist in a deserved cultural justice. About 100 pages of the book, grouped under Plates, were used for the reproduced works of Grillo's paintings, in sterling pictures. The published paintings, including what the author described as "easel" works and stained-glass, covered from 1960 to as close as 2019. Curiously, some of the works have no dates, suggesting that Grillo, as the author noted, hardly gave much attention to documentation, earlier in his career. However, Grillo, as an artist whose career enriched modern Nigerian art was not in doubt, across the genres of painting and sculpture. For an artist of such depth of versatility, his non-commissioned works in paintings, which are more visible to the general public, weighed higher on the scale of documentation, so the book stressed. For Okeke-Agulu, his choice of focusing on Grillo's career within the scope of painting was explained. "In other words, I am convinced that it is in painting that any judgement of accomplishment as an artist must rest," he wrote in the Preface of the book. "Thus the eventual decision to focus on his easel painting."

The book, contextually, took off with an expanded scope of history, in which the author, in Chapter One titled Yusuf Grillo and Modern Nigerian Art, highlighted the spot of Yaba Technical College (now Yaba College of Technology) in the country's visual arts trajectory. Having emphasised the Aina Onabolu era as the take off period of modern Nigerian art, Chapter One of the book noted how the then Yaba Technical College (1955-56), led in post-secondary school formal art training, in Nigeria. Efforts of a British colonial era teacher and artist, Paul Mount, at the college, got quite a space in the book as the author explained how Grillo was one of the beneficiaries of the Briton's classes. The author also argued that Mount's "development of geometric abstraction," influenced the interest of Grillo in such form.

If Zaria germinated the career of Grillo, the works of Mount at Yaba, in both studio and academic, according to Okeke-Agulu, sowed the seeds, much earlier. However, the book, described as the "first scholarly monograph" of the work of Grillo, gave out quite some depth on the sojourn of the artist at Nigerian College of Arts, Science and Technology (NCAST). Grillo's four years studies at NCAST, Okeke-Agulu noted, was enriched by quite a number of factors. The Zaria Arts Society, which included his peers such as Uche Okeke, Bruce Onobrakpeya, among others — energised by the atmosphere of decolonisation —  was one of such factors. However, within the formal academic space, quite a number of colonial era artists, the book stated, continued to inspire Grillo's style. Such art teachers included Patrick George (1923-2016) and Clifford Frith (b. 1924).

The Zaria Art Society's natural synthesis, on which members mounted their ideology, Okeke-Agulu noted, had an expanded version in Grillo's expression. "Although Grillo was firmly committed to the Art Society as a collective and participated in the group's activities, he did not share in the one crucial aspect that, in the years after Zaria, defined the work of Okeke, Nwoko and Onobrakpeya, and that is the extent to which indigenous and inherited Nigerian and African arts and cultures should be the basis for developing new formal styles," the author stated. "Grillo's position on the theory of natural synthesis is that if an artist is sincere about and is fully immersed in his social and cultural environment, his art will invariably and naturally reflect and speak to his experience of that background."

Back in Lagos, Grillo returned to Yaba Technical College, but as a tutor, assisting Mount and became the first Nigerian in the teaching staff of the art and design program. For a decade, Grillo's focus on art, within the context of the technology-driven academics of Yabatech, according to Okeke-Agulu, led to what's now known in Nigerian art history as the Yaba School.

However, that much was not achieved alone by Grillo as the author listed "a core team of artists and designers" in the college, such as Isiaka Osunde (1936-1997), who taught life drawing and sculpture; graphic designer, Olajide Oshiga (b. 1939) and Kolade Oshinowo (b. 1948). With the team, the college, Okeke-Agulu argued, "became the leading design school in Nigeria." The Grillo efforts at Yaba, regrettably, couldn't ascend beyond what the author described as "persistence emphasis in society and within governmental circles on paper qualification." Okeke-Agulu recalled how Grillo's advocacy for a semi-autonomous art school that will expand professionalism of art within the college system was "largely misunderstood." Between Grillo's idea of an art academy, that of Mount's classes and the glaring informality of the Osogbo workshops, Okeke-Agulu wondered if there was a "contradictory desire" on the part of the late artist.

The book, in chapter 2, titled Lagos, Community and Painting started with a capture of Grillo's thoughts on drawing a line between whatever his art communicates and his seeming Irreverence. "Communicating is not much an aim to me, but rather I paint to satisfy myself, by recreating the excitement of the original situation," the first page of the chapter quoted Grillo from an epigraph dated as far back as 1969.

So much has been written about Grillo and his legendary passion for Lagos themes. But Okeke-Agulu broadened the scope of discuss on the city by dragging into the critique net other observers' views. With such a rich background, the author concluded that Grillo's painting, unlike that of most artists from the Yaba school, provides "a long meditation" on the less focused "culturally rural" part of the city. Grillo's painting, he emphasised, captures Lagos better in the city's "hybrid and multicultural modernity."

Any subject or project on Grillo's painting without touching on the artist's favourite choice of blue colour and its diverse hues on his canvas, could be framed as incomplete. Okeke-Agulu, like many writers on Grillo's blue colour, stimulated more interest in the probity of the artist's legendary application of colours, mostly of the single texture. However, the book, under 'Reflections', a section solely interview extracted from Grillo, was more explicity on the subject.

Under what the author tagged as 'The Persistence of "cool colours", Grillo was quoted: "I don't think about the colours. They come on their own. They probably come with the subject." And in the past, the artist appeared to have given some answers that were not exactly honest of the reality on his choice of colours. "I have given many stupid answers to that question because so many people have asked about it," Grillo said. "And I have even read historians and critics like you saying it's because of this or that." Grillo argued that he "cannot psychoanalyze" himself. And whoever takes such probity as their business, Grillo said: "That is their palaver."

The book 'Yusuf Grillo Painting. Lagos. Life', published in memory of Okwuchukwu Enwezor (1963-2019), is no doubt a compelling read and collection for followers of Grillo's career trajectory and rarity of Eko themes as captured by the artist, in almost six decades.