Twenty One years after artist, Yisa Akinbolaji left Nigeria for Canada, his contributions to the development of the host community has been formally recognised in Premier's Volunteer Service Award.
On Thursday, Akinbolaji, the founder of Creative Foundation was honoured by the government
of Manitoba, Canada.
A week ahead of the award, Akinbolaji's activities have been formally presented by Hon. Minister Rochelle Squires for the Private Member's Statement. "My gratitude to Hon. Minister Rochelle Squires for the Private Member's Statement recognition at the Chamber of the Legislative Assembly of Manitoba on April 12", Akinbolaji stated on his Facebook page. "I am truly humbled by this honour, which is preceding the Premier’s Volunteer Service Award be given to me on April 19th".
Interestingly, Akinbolaji founded Creative Foundation in, Lagos, Nigeria before immigrating  to Canada.
"This recognition and the award have come at a time when the board of Creative Foundation is preparing for the 20th anniversary celebration in Manitoba next year. The celebration will include performances by cultural groups within our province showcasing talents from different continents to bring our audience first-class entertainment. We will show our hospitality by seeking support from hotels that will give you reasonable discounts in sponsorship of our program for anyone that wants to visit our city.
"It is interesting how fast time goes by. I still recall when I first initiated the Creative Foundation in Lagos before immigrating to Canada. I have had the privilege of speaking with some of those that experienced the amazing activities of the Creative Foundation in their formative years, and they have spoken of the lifelong impact that the Creative Foundation has had in their professional and personal lives. Some have gone on to be surgeons, educators, technologists, entrepreneurs, and entertainers who have established themselves throughout the globe. This is an encouraging indication that every good seed we sow has the potential of making the world a better place".
A day after the award ceremony, Akinbolaji shared his story of an immigrant artist with Tajudeen Sowole, via Internet chat.
Excerpts; "When I left Nigeria in 1997, I had thought my stay from the Lagos art scene would be short and only be for a two or three-year academic studies. While in Lagos, I was very busy with my creative endeavour and enjoyed adding value to the lives of the youths through Creative Foundation, which I established in 1994. Oba Adetunji Akinloye, the Ojomu of Ajiranland in Eti-Osa, was then the unofficial Patron. I wish I can get him to come to Canada for the 20th anniversary next year and honour him as life Patron or whatever.
"Anyway, I coordinated a fantastic conference at Eti-Osa local government in 1994 which was to launch the organization and to inspire the young kids and their parents. Musiliu Obanikoro was the chairman of Eti-Osa local government at that time. I invited him as a Special Guest and we got the hall for free. Oba Adetunji Akinloye and a few dignitaries from Ministry of Education in Alausa were also invited to make inspiring speeches. We had over 300 students and their teachers from Model Colleges and other schools within Lagos State. I had discussed clearly my vision with anyone I wanted to involve. I always prepare very well, so it was never difficult to get people buy into my vision. A very few people whom I have realized were selfish were dropped from the program so fast. I get very bored if what I do is only for my benefit. Prof. Yusuf Grillo was also very supportive. I arranged a tour-visit to his studio and to many other places at various times. 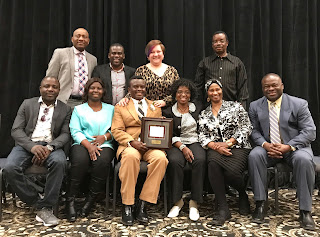 "Before that period I was also the Secretary of Society of Nigerian Artists, Lagos chapter with my friend Kunle Adeyemi as President - no, it was called Chairman. 1994 was also within the period that I was teaching at the Lagos State Model College, Badore and as earlier as an adjunct lecturer of Painting and Drawing at the Lagos State College of Education, Ijanikin with Deinde Agoro as my HOD. I heard he became Deputy Provost while I was already in Canada. My experience with the youth was the most fun and inspiring. I taught them in ways that I could feel I was correcting the mistakes I had made when I was their age and it worked. Many of them have continued to share with me their experiences with gratitude.
"The reason I first established the Creative Foundation in Nigeria was to develop a generation of youth that will grow to appreciate art and use their foundation in creativity to help them develop their innovative ideas in whatever career they choose much more easily.  Knowing that the poor will always be amongst mankind, I also believe that if we develop youth to become visionaries and help establish empathy in them, they will grow to help make the world a better place.
"How I started establishing myself in Winnipeg:
Within the period of my first three years in Winnipeg, though the weather was truly unbearable, I recognized that the vibrant community was welcoming my contributions via art talks, and I made a good impression during my first exhibition. I established the Creative Foundation in 1999 while I was still studying, and I noticed that anyone who heard of what I was doing was quickly spreading the news. I was elected president of the Manitoba Society of Artists at the 100th anniversary year, which was in 2001 serving till 2003.
"Looking back, I do not regret my staying in North America after my studies because I feel I can use the opportunity of staying to do good and to promote the relevance and positive contribution of immigrants especially Nigeria. And I'm establishing myself internationally. If Bill Gates can come to Nigeria to help, I feel my contribution will show that immigrants are not just here to take.
"The community work I do does not stop me from my creation. The technique I established which has resulted in the development of Remoglue, which is a new painting medium for artists is still while I'm making my social contributions".