A Textile-Inspired Journey of Void To Form on Adeshina's palette


With a background in textile design, Ademola Adeshina uses the canvas broadly by appropriating fundamentals of art creation. Late arrival of visitors to the opening of the artist's solo art exhibition titled Void To Form at the moderate lobby space at Moorehouse Hotel, Ikoyi, Lagos, not withstanding, Adeshina had at least one guest with whom to share his findings about genesis or basics of art creation. 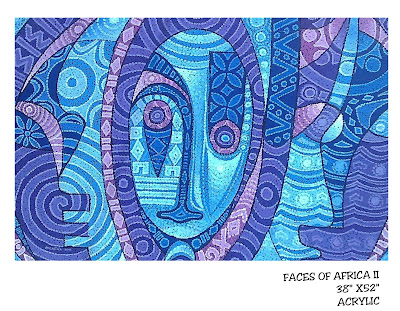 In art parlance, content of forms such as styles and techniques are, perhaps, most often taken for granted as the results of individual artist's skills in whatever chosen medium. But Adeshina argues that before a form is achieved, there comes a proper articulation and usage of the blank space known in technical term as ‘void.’


Being a textile artist, Adeshina should know better about the transition from void to form in the intellectual journey of appropriating creative contents. "It's like a child, fresh with blank mind. Whatever the child grows up with becomes the basis for a formative period," Adeshina tells his only guest during a tour of the works on display. "The child's mind is represented in my canvas, preparing for the sketches and paintings."


Taking art of textile design from the mills onto the canvas as seen in Adeshina's rendition of blue hues such as Family Circle, What Goes Round and Supplication as well as multi-colours like Proverbs -II, Eye Contacts and Symbols of Authority for examples afford a better appreciation of the depth of artistic contents in the end product that becomes fabric.


Apart from the artist's thematic focus on basics of transition from Void to Form, it's of interest seeing his walls accommodate non-textile art forms. In fact, portraitures in stylised realism and semi abstract or impressionism are two other forms pronounced on display.


In compartmented faces such as Fragments of Beauty, Nma (Beauty) Olori (King's Wife), and Oju Ewa,  an artist whose skills in design and patterns is very glarring, making the portraits appear like prints from the textile mills. Still on Adeshina's design skill as an asset, works like Migration, Exodus, The Way We Are and a collage of photograph cut out, Percepttion explain the srength of the artist in colour control. In vertical renditions, these works strengthens the eclectic textures of Adeshina's echibits.


Still on the diversity of the displays, two works: a core abstract The Source and a landscape, Grazing also expose the artist's quality across genres and themes. Specifically, Grazing, which attempts to meet classic form would hardly be pushed aside, particularly in the artist's toning of greenery against a poetic blue sky. For The Source, there appears to be a thin line between the form as an abstraction and capturing of a water sprouting spot.


Taking the concept of Void To Form beyond art space, Adeshina expands his thoughts, noting, "Maturity is the 'form' of expressing those values and morals, which is embedded in every human."


In his contribution to the brochure of Void To Form, Chief Adeniyi Adediran of Department of Fine and Applied Arts, Ladoke Akintola University of Technology, Ogbomoso notes that the exhibition presents Adeshina "as a bundle of divergent talents."
at December 20, 2015