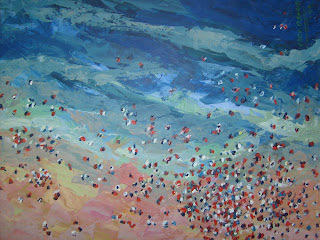 A painting by Osazuwa titled ‘The Beach Area View’

By Tajudeen Sowole
Style, technique or medium, as focus of art exhibition's theme would hardly attract attention. But when such a central theme comes from an artist of nearly three decades practice as Osazuwa Osagie, the contents deserve a keen attention.

In this context, Osazuwa's nine years sojourn in alternative medium to oil painting is narrated as My Journey in Acrylic in a solo exhibition currently showing till August 30, 2015 at Quintessence Gallery, Lekki, Lagos. Perhaps, nine years of focus on a specific medium - in more than 30 years of an artist's career - is worth taking a look irrespective of the seemingly lightweight feel of the subject.

It is of note that Osazuwa is having his second solo exhibition in three years. Quite a departure from what used to be a long break for the Auchi Polytechnic-trained artist. His last solo titled Views In Colours held at National Museum, Onikan, Lagos, was in 2012 after a long pause. At a preview of the show, he disclosed that there would be a new period in his art. He called it ‘Objective’ period, which he described as “creating argument with images.”

Three years after, perhaps the expected objective’ period is being explained in how acrylic "serves his purpose of painting on site." It does appear there is more to the inspiration behind the gathering of collection that has been resting for almost nine years in his studio. His kind of plein-air-painting, he says, "is about documenting places and events." And because he always likes to complete the works right there at a given location, the acrylic paint, which dries faster, he insists, meets "my challenge."

Indeed, some of the works would be of interest to followers and historians of a new Lagos, which is chasing what appears as a difficult megacity status. Remember the old settlement of ‘illegal’ squatters off the waters along Osborne and Third Mainland Bridge? How changes came so fast; the spot is the same Ilubirin, which is currently a site for Lagos State Government’s housing project of 1,200 units to be known as Ilubirin Foreshore Estate. However, Osagie's brush strokes were fast enough to document the remains of the old settlement; he thus rescued history from being lost completely. The artist recalls how "I used to paint a lot of Ilubirin themes on the Ikoyi Peninsula. Today, Ilubirin as we knew it is no more."

Osazuwa boasts that his works focus on documenting events and places, as well as stress their education content "and not necessarily aesthetics.” One of the works titled ‘Ikorodu Foreshore’, depicting a small riverside residential settlement off Ikorodu Road between Mile12 and Ikorodu town confirms Osazuwa's visual documenting claims. "In a couple of years, this settlement along the Ikorodu Road may just be no more when government comes in," Osazuwa predicts. "Now, I have it painted for the future to know what the place used to look like just in case the bulldozers roll over some day." Another work, ‘Royal Procession’, which captures traditional African leaders, reveals how far - beyond the shores of Nigeria - that the artist's brush strokes have gone in the field of documenting events and places. "It was a royal gathering of traditional rulers in Ghana," Osazua says, recalling how he captured the scene during his residence years in Ghana over a decade ago.

According to him, “Artists should be versatile." He insists that being known for just one form of expression is dangerous. "In fact, artists should be able to sculpt. I do." Osazuwa, a native of Benin City, Edo State, appears to be nostalgic with regard to the direction of his art in the future. His next show, he discloses, "would include some bronze sculptures."

Proudly a portraitist, Osazuwa is currently a freelance cartoonist with The Nation newspaper.
at July 05, 2015