By Tajudeen Sowole
Six decades of architecture photography across Lagos Island by Gillian Hopwood, currently showing as A Photographer’s Odyssey, at Wheatbaker Hotel, Ikoyi, and ending on April 9, 2015 tells the story of a city with inherent multi-culture architectural texture.

Hopwood, an architect has been living in Nigeria with her husband, John Godwin, a professor of architecture, since 1954 when they both arrived here from England. Supported by Wheatbaker.and Vineyard, the opening of exhibition of Hopwood's photography works was also accompanied with the launch of a book, A Photographer's Odyssey, which she  co-authored with Godwin.

From the Gothic to Portuguese and mixed of modern as well as contemporary designs, which characterise Lagos Island landscape, Hopwood's lens documents generations of architectural tastes that make the city's enigmatic trajectory. Taking shots of buildings and streetscape during "every Sunday walk" in 1954 was an extension of documenting her journey - as an expatriate-  in Lagos, Hopwood tells his guest, few days after the exhibition opened. But many decades after, in 2004 precisely, a comparative idea, she discloses, came into the documentary concept  "Comparative architecture on how Lagos has changed over the decades."

Some of the display include photographs of streetscapes such as Adeniji Adele Road, a foreshore for canoes trading on the lagoon; Upper King Road, named after Dr King; Balogun Square, a large stretch with shops on the ground floor and residence on upper levels; Moloney Street with the famous building that was "first a branch of John Holt, then a noisy night club" and some years ago a shopping Mall; and Onikan Road, described as the then only access way to Ikoyi. Also on display are pictures of memorable or landmark buildings such as Iga Idunganran Entrance to the Oba of Lagos Palace said to have been originally built as Portuguese design, but changed over the decades; abandoned restoration project, Ilojo Bar at Tinubu Square, but still standing with Brazilian architecture; the Central Legislative House, at the perimeter of Tafawa Balewa Square (TBS); and the Central Mosque on Victoria Street, rebuilt in 1984.

Much of the 39 works on display were shot during the era of non-digital camera when film passes through chemical processing to form images. How did Hopwood preserve the negative film of her shots for over five decades? "The negatives have been carefully stored in the U.K by my father," she enthuses. Keeping the negatives intact for such a long period also confirms her father's passion for documentary through photography. Earlier Hopwood explains how the father actually encouraged her to document her journey in Nigeria. In fact, the camera used in taking the pictures was a new one said to have been given by her father for the purpose of documenting her journey in Nigeria.
Quite amazing that such negative film, as old as 50 years were still being preserved to the point when digital took over. "In 2004, we had them in digital," Hopwood recalls, hoping that the electronic preservation would last another three decades. " I was told the digital would last for another 30 years before deterioration. " But she seems unruffled about the possibility of losing the images to prolong years of digital preservation. The original negative, he assures, would always be reliable. She draws from the example of resilience and higher resolution of film or celluloid over digital  "No fear, I still have the negatives from my father's shots taken in 1924."

For fashion buffs who may want to use Hopwood's old pictures as some kind of reference, sorry; much of the pictures in A Photographer's Odyssey are architecture-focused and has no human traffic on the streets. But automobile enthusiasts have something to cheer as quite few old cars are captured in some of the pictures.

Also, the pictures, deliberately, have been printed in black and white. "For architecture photography, black and white is the best," Hopwood argues. Her argument, indeed support the general belief that black and white or monochrome preserves picture longer than colour.
Apart from the comparative architectural texture of Lagos between the 1950s and the 2000s, which the exhibition focuses, the tolerance level of the inhabitants of the city appears to have changed as well. "Taking pictures, many decades after, at the same places was different," Hopwood states. "We had police protection in 2004."

In his Foreword to the book version of A Photographer’s Odyssey, Babatunde Raji Fashola, Governor of Lagos State stresses the dynamics of Lagos as a city constantly experiencing changes despite enormous pressure on its resources. “Lagos is an enigma and this book, A Photographer’s Odyssey captures the development and essence of this every changing City-State over a 60 year period,” writes Fashola whose tenure of nearly eight years epitomises the enigmatic character of Lagos. “This book now helps to create a torch passing moment between my generation and that of my children.” 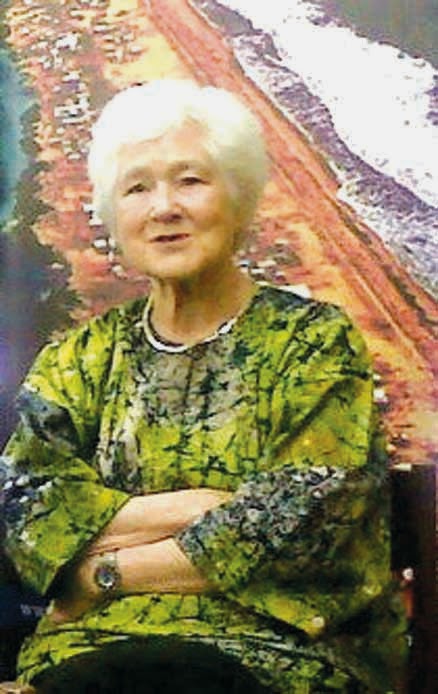 Quite a number of people, particularly from the architecture profession have been tracking Hopwood and Godwin's career. One of them, Mosun Ogunbanjo, Director at the Wheatbaker notes: “The frank, naked and non-judgemental nature of the photographs leaves the viewer to reach his or her own conclusions regarding present day Lagos, whilst the side notes capture the richness of a moment in time.” In 1955 Hopwood and Godwin moved from Ebute Metta to Lagos Island where they have been living and runns their architecture firm on Boyle Street. The couple became Nigerian citizens in 2013.