By Tajudeen Sowole
In the 80-days celebration of Prof Wole Soyinka's 80th birthday, the visual arts provides a wide depth into the career of the Nobel laureate, so suggests a gathering of artists titled Calibrating Kongi at 80: The Art Exhibition.

Currently showing till July 30, 2014 at the top floor of J.P. Clark Centre, Faculty of Arts, University of Lagos (Unilag), Akoka, the group art exhibition, in curatorial context, could make contents for a Wole Soyinka museum in the future. The works, which include medium of painting, mixed media, design and sculpture place Soyinka as a legend whose impact on the society has become a treasure to humanity, across generations and cultures. 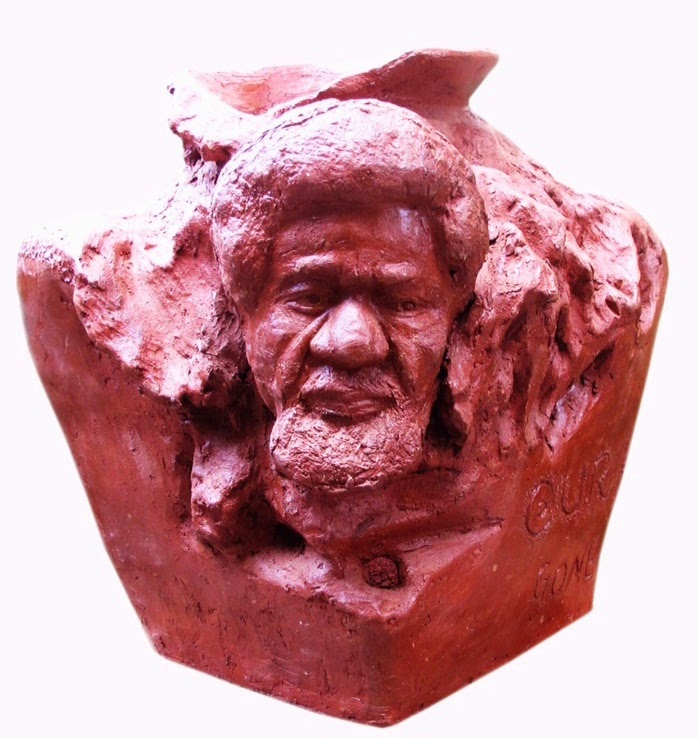 A well-researched exhibition by the curator, Prof Peju Layiwola, the works on display consist of largely memorabilia of Soyinka-related art pieces that are as old as some of his books and plays or essays. Even, recently produced art pieces such as posters that represent some of Soyinka"s staged plays strengthen the museum prospect contents of the exhibition. The exhibition is organized as part of the Soyinka International Conference 2014.

Some of the exhibiting artists include Dr Bruce Onobrakpeya, Tola Wewe, Layiwola, Bolaji Ogunwo, Sheriff Oyetunde, David Ikelewve, Taye Erewele, Greg Odakose among others. Jelili Atiku had a performing in front of the centre’s building.
In Onobrakpeya's 1986 copper foiled Horns of Freedom, comes a hidden story about the celebration of the Nobel Prize given to Soyinka. The work, according to a text attached, is inspired by Soyinka's fearlessness. The relief surface depicts three identical horns that represent freedom, courage and honour. However, the memorabilia content of the work comes from the story that led to the production of the 28 year-old art piece: Onobrakpeya was commissioned to produce 200 prints which were to be sold "to help cover the cost of some of the events associated with" the Nobel prize in 1986.  After the production, Onobrakeya would extend the concept into a single, but large  art piece, hence the Horns of Freedom.
Indeed, quite a number of Onobrakpeya's works, seen outside the ongoing exhibition have traces of inspirations from authors such as Soyinka and D.O Fagunwa. In fact, in another work mounted just beside Horns of Freedom and titled Encounter with Eru (Fear) and the Ogboni, the printmaker appropriates his passion for the literary works of the two authors. Rendered in prints on paper, it confirms Onobrakpeya's attachment to the literary scene in Nigeria just as the printmaker would later be known as one of the Nigerian artists whose signatures are mostly used on book covers. For Encounter with Eru (Fear) and the Ogboni, the inspiration comes from The Forest of a Thousand Daemons’ and The Ogboni extracted from Soyinka's Ake- The Years of Childhood.’
One of the strong areas of Soyinka's literary ingenuity is his connecting cultures across peoples, where such rare link exists. Recall his comparative analysis of two deities, Ogun (Yoruba) and Dionysus (Greek) in one of his works.  Layiwola's oval-shaped aluminum print titled Conversation of the Gods captures the poet's analysis. Layiwola first showed the work in 2005, at a group exhibition of 95 artists to mark the Greek National Day in Lagos, which was opened by Soyinka. For the exhibition, 95 artists from across Nigeria participated. She notes that the work "draws on the similarities between both Greek and Yoruba mythologies." Soyinka’s comparison of Ogun and Dionysus in a 1967 essay, The Fourth Stage: Through the Mysteries of Ogun to the Origin of Yoruba Tragedy, Layiwola argues "crystalises" in her work.
From paintings that depict posters of Soyinka plays designed by students, to sculptural pieces by Layiwola and Ikyeleve, Akintunde and Ajetumobi, the exhibition, arguably, appears like one of the richest single events in recent times on the career of Soyinka. Such museum materials, for example, ooze in the sculpture joint ly produced by Layiwola and Ikyeleve, titled Staff of Brother Jero; Akintunde's Melting Pot and Ajetutobi's work of the same title; and the students' artistic impressions of Death and the King's Horseman, Abiku, among others. 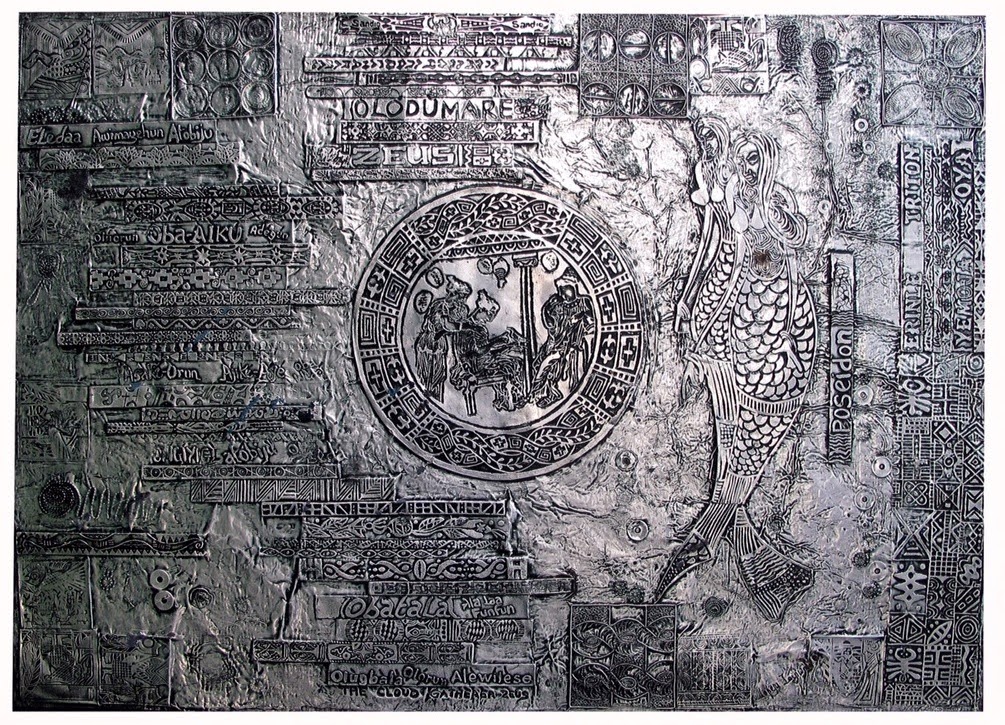 Shortly before declaring the exhibition opened, renowned poet. Prof J.P Clark in his speech revisited the Mbari Mbayo club period of the icons known in the Nigerian literary parlance as the pioneer quartet. While clarifying that though he, Soyinka, Chinua Achebe and Christopher Okigbo attended the University College Ibadan (now University of Ibadan), Clark disclosed that himself and some of his colleagues "are a little bit confused" with the sobriquet Ibadan quartet or pioneer quartet. "We all went to University College together, but not at the same time," he clarified. "We related together at Mbari during Nigeria’s independence period. Onobrakpeya joined us later." However, Clark stressed the gains of the gathering as it cuts across "literary art, music theatre and visual arts."
And on the celebration of Soyinka's 80th birthday, he argued that it goes beyond the celebrant. "It's also a celebration of African literature." Earlier, he joked about "Wole always say he is older than me. But he knows he is my aburo, by six months though." In December last year, Clark marked his 80th birthday.
In her curatorial note Layiwola, Associate Professor of Art History at the Department of Creative Arts, University of Lagos, also revisits the synergy that exists among the creative people across the genres in the 1960. She notes that Onobrakpeya, JP Clark and Wole Soyinka all formed part of the Mbari Mbayo Group in the 1960s at Ibadan.” The works of the visual artist among the group, she stresses, reflect the synergy that characterised creative era of collaboration among the professionals across disciplines in the arts.
at July 28, 2014