BY TAJUDEEN SOWOLE
WITH over two decades of promoting art across the divide, Oladele Olaopa-led African Art Resource Centre’s (AARC) effort may have begun to impact on the future of Nigerian art. At the In Experience Nigeria Art Show (ENAS) recently, Olaopa, in fact, proved this.

The show, in its 21st edition, focused on areas such as art competition, awards and workshops for children. Larry Isimah, winner of the art competition, was honoured. Gani Odutokun, the late master was also honoured. There was a children's creative camp.
Isimah’s winning work titled Life, viewed from a soft copy sent by Olaopa, shows a work that imbibes nearly all the rules of art in just one piece: the lines, perspectives, light and shades. Whatever the jury of the competition wanted, Isimah’s Life had them all.

The honour, Olaopa informs did not stop with the winner of the competition or the departed master, as Bruce Onobrakpeya, a living master, who incidentally was the guest of honour, was celebrated. He was presented with two gifts — one for his 80th birthday and the second for his continued contributions to the arts sector in Nigeria.
OLAOPA’s event, coincidentally, brought a boost for the master printmaker’s yearly art resource programme, the Harmattan Workshop, which holds at Agbarha-Otor, Delta State.

Olaopa says, “AARC will collaborate with the Harmattan Workshop for mutual benefits.” He continues, “the unfriendly attitude of sponsors for visual arts events is not encouraging, especially as the industry needs all the help it can get.”
Indeed, it’s quiet disturbing, for example, that the 21st edition of ENAS, which featured works of over 30 artists in various media such as oil, watercolour, pastel and wood metal did not attract attention of a major sponsor.

However, ‘the show must go on’ as the slogan in theatre says. Olaopa would not relent, so, the future must be protected. Securing the future of art, basically in the AARC’s thinking, is more of art education for the children through workshops.

The AARC’s children's creative camp, Olaopa recalls, “was established in 2005 with the objective of encouraging creative thinking in children.” And the programme appears to be making impact as increasing number of schools show interest year after year.

Areas of focus for the workshop include greeting card and T-Shirt designs.
As it is important to prepare tomorrow’s leaders for the future challenges, particularly in the areas of intelligence, a section known as The Nigerian Jigsaw Puzzle was introduced in this edition. 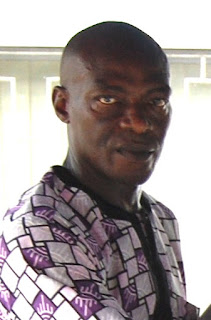 “This unique segment was the highlight of the year's activities. First, each child was given a cutout card of a state to decorate. Later, they were called to place the state on a giant board in the appropriate position. Gradually, as each state is fixed, the whole land scale of Nigeria on the board emerged,” he says.
Olaopa states that the segment was also meant to teach the children the virtues of cooperation while familiarising themselves with the geography of Nigeria.