Ahead of Lagos Black Heritage Festival 2013, Samba Girls peep in 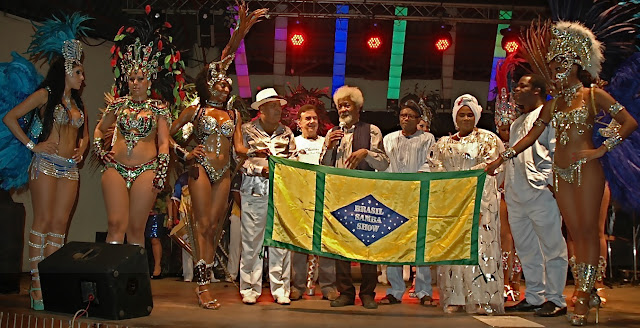 Prof Wole Soyinka, speaking during the presentation of Samba dancers from Brazil, to audience at Freedom Park, Lagos yesterday, perhaps as preview of what to expect at Lagos Black Heritage Festival (LBHF) 2013. The LBHF holds yearly April.

If display such as witnessed at Freedom Park, Lagos Island, last Saturday is what to expect as part of the 2013 Lagos Black Heritage Festival  LBHF, some explanations would be needed to blur the line between culture and indecent exposure. For example, one may ask: do we really need to import or duplicate the Samba nudity from Brazil to promote tourism in Nigeria?

In fact sources say the Samba girls seen in Lagos on Saturday were on their way to Calabar Festival 2012.
at December 23, 2012