Emmah Mbanefo’s Ambivalence, which opened yesterday at Nimbus Gallery, Ikoyi, Lagos, might have underscored the artist’s prowess in full time studio practice, after his one-decade retreat from the exhibition circuit.

DURING the preview of the show organised by C & F Porter Novelli, academic debate ensued to explain Ambivalence within the context of the exhibition, which runs till May 6, 2012.
The show features paintings, etchings, sculptures and installations.
Having chosen a “complex” word for the theme of a show expected to break his long silence on the art circuit, Mbanefo would rather prefer to de-emphasis the complexity. Although, he argued that it is about a pre-determined foundation, which is often beyond control, he however stated that the “foundation is challenged, pushed and pulled as we fight to define ourselves.” He declared that his “Ambivalence is the search for the good, the spirit of humanity.” The work, he explained, therefore “explores, and sifts through humanity, interrogating emotions – strong feelings.”
Indeed, few of the works available for the preview showed Mbanefo as an artist who relishes his art teaching and training. In fact, he has deployed the teaching experience to boost his full studio practice. For example, in works such as Mma, Ifejioku and Ajie, Mbanefo’s deployment of spirituality, within the cultural value context, enhances the subtle aesthetics.
His brushing in a masquerade-like colour dominance titled Mma Ofeke may attract viewer’s immediate attention, but the movement of the violent-postured lady, which looks like a character from an action comic magazine celebrates Mbanefo’s skill. And before the graceful movement of Mma Ofeke infects an unsuspecting viewer, Mbanefo cautioned of the hidden deception in the lady. This figure, he said, represents “a social defiant.”
Even deeper in spirituality is an abstract sculpture that looks like an object plucked from a  shrine. He said, it’s a depiction of “traditional Igbo ceremony performed before a yam planting season.”
Explaining his Ambivalence via art would not just be all about traditional belief expressed in abstractive context, but also in monotheism, so suggests Ije Uko, “a reference to a Christ’s faithful.”

On representational art, the bust of a lady in gele titled Ajie, is a tribute to what the artist described as honour “to daughters of Onicha ado n’ndu community,” of Onitsha. More salient, the bust, elevated on high pedestal, perhaps to stress the exalted place of the ladies, also flaunts Mbanefo’s skill in portraiture. Such skill is conspicuous in one of his public monuments, the Mobolaji Bank-Anthony statue mounted in 1992 on the road named after the late Lagos philanthropist, in Ikeja, Lagos.
MBANEFO is certainly a regular name in the Lagos art circuit, despite living in neighbouring Ogun State. However, being in full time studio practice in the last 25 years after he left his teaching, Mbanefo, indeed, has made his mark, given the number of works in public places he has to his credit, across the country. Works in the Ambivalence exhibition actually reflect his resilience.
But the artist still nurses angst against the academia. Trained as an art teacher and specialised in Sculpture/Textile, he recalled how “I fought for art practice,” as zenith in art, “and not art teaching.”  For his stand, he said, “I got frustrated,” and “chose the real practice where you do trial and error.”
His journey through uncertainty is likened to Ambivalence. He argued that, in every struggle, “there is a foundation of goodness, in the individual spirit and in humanity as a whole.” The brightness, he noted, “is defined by humanity’s balance, association and place in accordance with the laws of nature.”
Faintly, the shadow of late Ben Enwonwu is seen in some of Mbanefo’s work; particularly, in the traditional themes. Enwonwu, admitted Mbanefo, influenced his art to a certain extent, particularly in ideology. Aside Enwonwu’s influence, Mbanefo may have picked from other artists such as Ben Osawe, Okpu Eze and Bruce Onobrakpeya, all of whom he worked with.   Among these mentors, he mentioned Enwonwu three times in his C.V. One of such, he recalled, was a “privilege to be lectured for forty-five minutes by Enwonwu on Nigeria's ancient civilizations at the office of the curator, National Museum, Onikan Lagos.”

At the opening on Saturday, the Obi of Onitsha, His Majesty, Nnaemeka Achebe, who was the special guest of honour, used the occasion to call for an urgent review of the National Policy on Arts and Culture to enhance development of the sector.

Achebe, a patron of the arts stated: “I wish to reiterate the need for a greater focus on our arts and culture in order to give these the pride of place that they deserve. There is an urgent need for the review of our National Policy on Arts and Culture and its implementation with a view to achieving greater relevance and sustainability; such that our art and culture will become key development resources.

“The policy should provide for massive investments by the government and its agencies; as well as the organised private sector, communities and wealthy individuals. The purpose would be to entrench and popularize arts and culture in our educational institutions as well as build relevant institutions and facilities such as museums, galleries, theatres, etc, that will bring our arts and culture to the level of the common man. After all, art should not only be appreciated by the elite for its aesthetic potentials but should also be seen as a major defining element of a people’s identity.”


FOR Nimbus Gallery, which made its come back with a group show, Metanoia, an exhibition of paintings and sculptures late last year after nearly six years break, “Mbanefo’s inspiration and driving force is the continuous pursuit of artistic originality and perfection,” the Creative Director of Nimbus Gallery, Chike Nwagbogu, stated.
A leading patron of the arts, His Majesty Nnaemeka Achebe, the Obi of Onitsha, disclosed Nwagbogu, would declare the exhibition open. To him, Mbanefo is “Artist’s Artist.” 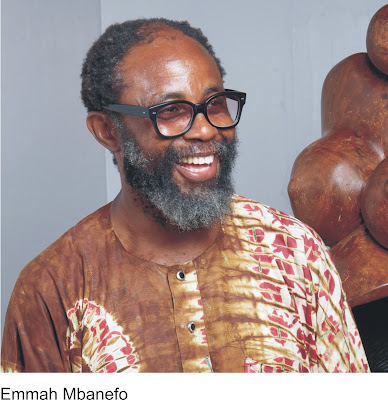 EMMAH Mbanefo was born 1960 in Jos, Plateau State. He studied Fine Arts at the Federal Polytechnic, Auchi, majoring in sculpture and textiles.
Some of his works in public places include the statue of Sgt. Egbunike and Monsignor Obelagu, commissioned by Nnanyelugo Jas Egbunike, 1988 and statue of Chief Nkwocha Okonkwo (Obudulu), commissioned by Chief R.O. Nkwocha (Ide of Enugwu-Ukwu and Umu Nri).
at April 23, 2012