India-Nigeria... 50 years through the lens
(First published on Tuesday, October 14, 2008)
By Tajudeen Sowole
FLASHBACK to images of an enduring relationship was part of the just held exhibitions to mark the 50th Anniversary of diplomatic relationship between India and Nigeria.
Organised by High Commission of India, Abuja, the event had on display two exhibitions: photo and tourism promotions at Atrium, Palms, Lekki, Lagos. The shows held from October 9, through 12, 2008.

Although by unknown photographers, these exhibits raised some technical issues on archival photography in the age of digital imaging.
Separated into colour and monochrome, which apparently explains the period of events when the photographs were taken, the display records the relationship from the commerce sector in 1959, a year before India established its diplomatic mission in Nigeria. Records have it that the two countries started diplomatic relationship before Nigeria's independence in 1960.
One of the exhibits that captures the early days of this relationship had the then Nigeria's Minister of Finance, Okotie Eboh met with his India counterpart, Sri Lal Shashri in New Delhi on July 13, 1959.
Still on the early years, the two countries must have resolved to explore their international relations on the pedestal of economic gains as other photos suggest: Vice President of India, Dr. S. Ranharkrishna received a delegation of Nigeria Economic Mission in New Delhi on June 26, 1961; the Prime Minister, Jawaharlal Nehru hosted his Nigerian counterpart, Sir Abubakar Tafawa Balewa in New Delhi, on July 4, 1961; Premier of the Eastern Region, Michael Opara visited the National Physical Laboratory in India's capital city.
Perhaps the most active year in India-Nigeria relationship was in 1962 as other exhibits suggest. Nehru and Indira Gandhi were on a state visit to Nigeria in September, 1962 and received by Balewa at the Ikeja Airport; met with Oba of Lagos, Sir Adeniji Adele II; got a reception organised in their honour at the Island Club, Ikoyi.
Next in that line of significant periods of the relationship – again established through state visit – was in 1983 as the former Minister for Establishment in 1962 and later became President, Alhaji Shehu Shagari received India's President and Prime Minister respectively, Zoul Singh and Indira Gandhi at the Ikeja Airport; State House reception and Garden Party, all captured in several pictures.
While event such as this affirms the importance of photo documentation, there is a lesson to learn in archival photography, particularly in the age of digital, a period which is fast sending film into extinction.
Traditionally, film provides better resolution than digital, even though the line is getting more blurred by the day as technology appears to be in favour of the latter. However, this exhibition, surprisingly, presents a case for the extinction-bound film format.
Among the entire exhibits on display, the one with the highest resolution was a shot taken in 1963 – over 30 years before digital photography. That picture had the Chief Justice of India, Shri B.P Sinha hosted Nigeria's first Chief Justice, Sir Adetokunbo Ademola in India.
Colour photographs at the display taken of events in the last three years could not have been taken with the 35mm film, so suggests the rapid succession of shots usually associated with digital camera.
Among the over 50 colour pictures with very low resolution include those dated to 2005 when President Olusegun Obasanjo and the then Chief of Army Staff, General Martin Agwai hosted India's Chief of Army Staff J.J. Singh as well as the visit, in 2007, of Hon Prime Minister of India Dr. Manmohan Singh at the Nnamdi Azikiwe International Airport.
Whatever the source of these photographs, the quality, compared to the monochrome taken decades before only proved a case for those who argue that the depth of knowledge of a cameraman makes the difference and not the format – film or digital.
However, an event such as this is very laudable, and perhaps deserves more than just an exhibition at the lobby of a shopping mall. In addition to the fact that the two countries are leading regional powers among the Commonwealth of nations, the diversity in ethnic and religion are almost similar as well. Also, it has been estimated that in the last one century, over 25, 000 Indians have made Nigeria their homes.
A statement from the High Commission of India, Abuja summed up the relationship between the two countries: "Both countries have been in the forefront of the worldwide anti-colonial and anti-apartheid struggle. Similarities in colonial struggle, ethnic diversity and geopolitical situation have created affinity and mutual goodwill between the two countries. Both India and Nigeria are members of UN, NAM, G-15, G-77 and the Commonwealth and have collaborated at various international organizations. Both share common perspectives on international political, social and development issues and these have manifested in various meetings at UN, WTO, etc. Nigeria is strongly opposed to all forms of terrorism." 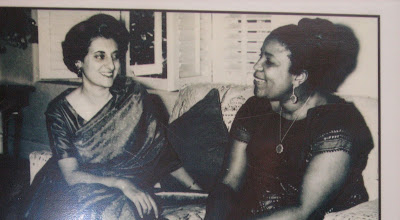 Shortly before the show, the commissioner stated that the government of India has promised continued assistance towards the rapid development of its host country, in actualising the Vision 2020 projection.
Anil Trigunayat, India's Deputy High Commissioner said the exhibition would expose the cordial and friendly relationship between the two countries, which he added, have been fostered in the last 50 years.
Noting that the India-Nigeria friendship in the past half century have brought tremendous blessings for both countries, Trigunayat promised that more vistas would be sought to further boost the cordial ties.
He stressed: "Nigeria enjoys our largest partnership not only in the oil sector but non-oil sectors like arts. We hope in years to come, India will become the highest investor in Nigeria. The cordial ties have continued to blossom because of same similarities-huge population, diverse ethnic and religious groups, and strategic locations and quest to develop.
"The 50 years of engagement with Nigeria has brought tremendous boost in areas of trade, politics, culture, religion and understanding. India is looking for more possibilities to have more Nigerian firms because Nigeria with its huge human and natural resources, has the potential to become another great power like India."
He also used the occasion to urge Nigerian entrepreneurs to come forward for assistance to set up businesses in India.
Trigunayat noted that with India's achievement in the communication and health sectors as well as other areas, it "is more than ever prepared to assist Nigeria achieve same."
at December 03, 2011