The Woman Is A Landscape, is it?
BY TAJUDEEN SOWOLE (First published Jan 28-Feb 3, 2007)
Whatever female anatomy has in common with landscapes, looks like a subject to be unraveled in the science laboratory. In the meantime, the art studio has an answer in the exhibition, Rhapsody Unveiled, by painter, Rajiv Puri. The artist explains, through his works, that as female figures over the ages keep changing – according to different cultures and value – the shape of the landscapes cannot be divorced from the environmental changes, natural or man-made. 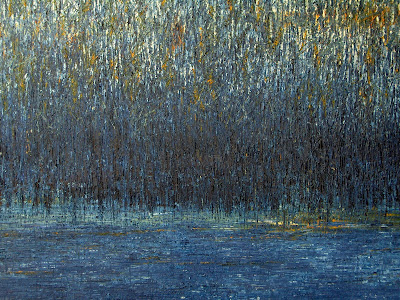 At Terra Kulture, Victoria Island, Lagos, Puri, a chattered accountant and self-taught artist presented 55 oil paintings  on female nudity and landscapes to the public, during the opening held on Saturday January 26, 2006. The exhibition ends on February 1, 2006.   The landscape paintings, strictly done without paintbrush includes sites in his home country, India, Nigeria and Malaysia. From the low grass capture of Malaysia, wood forest in India, to the aquatic setting in Lagos, Puri’s palette knife tool brings a multi-dimension attraction to landscape on canvas. Man remains adamant in heeding to the call of God to protect and increase the vegetation, Puri notes. The landscapes, he says, are an exploration of the wonders of mother earth - a journey into natures’ magnificence. "These works are inspired from the natural world – its perpetual change, its fragility, its calm, its rhythm, its devotion, its wild, but delicate form, its transient temper, its colour, its mood."  In abstract and surrealistic impressionism, Puri attempts to redefine nudity in the art. While some of the paintings are a bit on the bolder side, others offer modesty, complementing the synergy of art and the female anatomy.    He draws a line between art and sensuality and submits that these figural images on canvas should not be seen "from the point of view of providing pleasure, but as a cultural signifier". From the curve-less flabby medieval figure to the graceful Victorian age woman and Western elegance made popular in the mass media, the figural concept of femininity keep changing with time. This much interest, the anatomy of the softer gender have been generating over the ages.   But Puri notes that each situation has created more challenge for artists. "It also draw the spectator’s attention to changing representation of nudes across the years, across different cultures and deals with the complexities of what is sensual, erotic, or pornographic."
Beyond the sensuous attraction, he says, he loves to decorate women.  On and off the canvas? "I just find women more attractive to paint. And of course my mood and that of the subject determines my choice of colours."
Puri, a chartered accountant and fellow member of Institute of Chartered Accountants of India works and lives in Nigeria. He has had four exhibitions here starting from 1999 when he showed at Didi Museum, Rhapsody in hues – A celebration  of landscape, a charity event in support of the United Nations, was held in 2005. His other shows include about six exhibitions in India.
Born in India, 1955, some of Puri's exhibitions are :