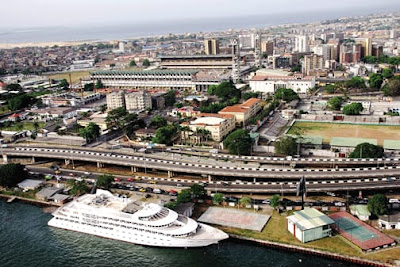 Lagos Island skylines from Onika vew, by Olayinka Oluwakuse III.
BY TAJUDEEN SOWOLE
FROM taking ordinary ‘pa-pa-pa’ snap shots, Olayinka Oluwakuse III, is today emerging as a photographer with passion for the urban streetscapes and skylines.Currently, Lagos is his focus as he boasts of stunning captures that would make the covers of tour and travel magazines.Largely concentrating on Lagos, with Victoria Island as his object of passion, Oluwakuse III's most recent shot on the third mainland bridge tells, vividly, the strange mixture of high-rise and slum structures of Lagos Island. Titled, Third Mainland Bridge, and printed in dye-tone, the aesthetic shot of the 11.8 km bridge underscores the great effort of the builders.Still on the Lagos Island, the photographer stresses that the city is beautiful as he goes aerial, again, capturing the Onikan axis of the Island from the controversial Sun Born Yacht (stationed close to the Naval Dockyard), the MUSON Centre building, City Mall, Tafawa Balewa Square, TBS and the Onikan Stadium. Of significance here is the power of the telephoto lens as Oluwakuse III captures the other end of the mainland exit of the Island.“I actually started as a pa-pa-pa (quick snap shot photographer), which I was enjoying; just having fun, taking friends, families at social gatherings, schools and other places of interest,” recalls Oluwakuse. But he says the fun was cut short when he came across the works of Don Barber. Professionalism sets in, bringing a broader perspective of what the camera can do.Confirming that quality of professionalism is an eye-level shots of the Marina – compartmentalised into three – showing how man complements nature: under-construction park along the CMS stretch enhanced by the foreground water and high-rise corporate offices against the painterly look of the skyline are a beauty to behold. Highlighted by the bold and black borderline, the artist’s interpretation of this section of the Lagos Island is too inviting for anyone to think of the hidden potholes on the roads and ugly looking bridges that could do with some paints.As sand-filling is taking over some sections of the marine stretch of Lagos, the artist’s lens has moved fast to document the historical slave site of Badagry marina where some 18th century cannons were stationed. He lamented that the “last time I was there, recently, the cannons were gone, due to sand filling.”For Oluwakuse, still in his late twenties, the choice to be a photographer did not come without a prize. He must have thought being “a grandson of a Lagos professional photographer, Oluwakuse” was enough for his parents and siblings to accept his choice of career. He was wrong: “At home, they used to call me ‘radical’ because of my passion for photography.”

And when he completed a degree course in Economics from Ladoke Akintola University of Technology (LAUTECH), and still stuck to his passion, making success of it, the label changed. “In my family, they say, ‘ah, radical is now classical o’ because they did not believe I could make a living on photography.”With a private viewing titled, Foto Ni Ede Yoruba in 2008, he tested the exhibition terrain. And in December last year, he made his debut solo exhibition, Re: 101 Reasons Not to Visit Lagos, at the Civic Centre, Victoria Island, Lagos. The show, he explains was a response to an article “101 Reasons not to Visit Lagos”, posted online by a foreigner.”Also, his presence on the photography scene is attracting the attention of the corporate world; a proposed new campaign for one of the leading banks, he discloses, is using some of his works.
at October 15, 2022