In London, Nigerian Contents Get Stronger With Camp's Primavera

U.K.-based sculptor, Sokari Douglas Camp, who is one of the most prominent Diaspora artists on the Lagos art space, returns to the London art exhibition circuit, continuing with her Nigerian contents. The artist is currently showing Primavera, a solo exhibition running till May 14, 2016 at October Gallery, London, U.K.


Camp's works have featured in nearly all the 15 editions of Nigeria's art auctions in Lagos organised by Arthouse Contemporary. And to stress consistent connection with her Nigerian roots, Douglas Camp, last year, did a Ken Saro Wiwa memorial sculpture - a work that is currently a subject of illegitimate impound by Nigerian Immigration Service.

Her Primavera, about 24 works, with few of them in set of two or more pieces, are not within the reach of Nigerian Immigration authority, and perhaps, have no 'political' statements to make. But the Nigerian contents - within contemporary taste - woven alongside European environment is, perhaps, one of the artist's elaborate works in recent times.

With cubist style, Douglas Camp has established a distinct identity in sculptural texture, which energises contemporary perspective in her art of moulding. For Primavera,, the artist keeps going stronger, particularly in dramatising some of the themes with atmospheric flavour. Such include Lovers Whispering, a rendition of couple's portrait with plants in the background; Posing With A Gun, a hunter, captured in what represents forest as trees are also seen in the background; and All The World Is Now Richer, six figures across select cultures, lined in front of backdrop with historical contents.

A gathering of modern and contemporary themes in Douglas Camp's exhibition without the social fashion codes of Nigerian women is unthinkable. The artist has done quite a lot of themes on gele, for example, in the past. In Primavera, she brings into African social space Kalabari Lady and a Yoruba Lady. Perhaps, there are little differences among the social dress codes of women of the south east and south south who share the common three piece clothing. But from Douglas Camp's Kalabari Lady, dressed in what is known - in Nigerian fashion parlance - as 'Ibo blouse' on top of double wrappers, adorned with gele, there seems to be no distinct difference from the dress codes of other tribes that share the same styles.

From modern to contemporary, the three piece buba (blouse) iro (wrapper) and ikpele (schawl) for a Yoruba woman appears to have changed slightly so suggests, Douglas Camp's Yoruba Lady. The Ikpele, traditionally, used to serve the dual roles for the hips and shoulders depending on the choice of the wearer. But two ikpele - instead of one - in Douglas Camp's Yoruba Lady seems to represent 'over dressing' by some wearers, isn't it?

October Gallery describes Douglas Camp's work as large-scale sculptures that "make frequent reference to her Nigerian roots, at the same time, encompassing contemporary international issues." Themetically, the Primavera exhibition, according to the gallery, is a gathering of new body of work by the artist, which has common classical European tradition, among others.  "The large work Europe supported by Africa and America, recreates and adapts an 18th century engraving by William Blake. This intricate composition features three female figures touching and supporting each other, dressed in contemporary clothing remnant of high fashion in Nigeria modern icons of contemporary culture and society." 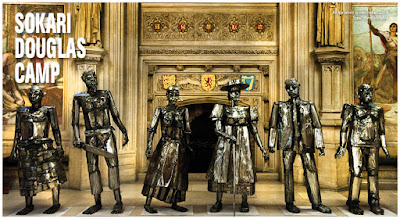 Excerpts from the artist's bio: Douglas Camp studied fine art at the Central School of Art and Design and the Royal College of Art. She has represented Britain and Nigeria in a number of exhibitions and has had more than 40 solo shows worldwide. Her work is in the permanent collections of the National Museum of African Art, Smithsonian Institute, Washington, D.C.; Setagaya Art Museum, Tokyo and the British Museum, London.

Last year she picked a winner's slot for a memorial for Ken Saro-Wiwa in London. In 2003, she was on the shortlist of artists for the Fourth Plinth. She collaborated with Ground Force to create an African Garden for the British Museum, as part of Africa ‘05. In 2005, she was awarded a CBE in recognition of her services to art. Her critically acclaimed work Battle Bus travelled to Nigeria last year as part of Action Saro-Wiwa, a campaign to clean up the Niger Delta, eliciting nationwide support after having been held by local government officials.

Sokari Douglas Camp CBE (b. 1958, Nigeria) is a sculptor whose primary material is steel. Her sculptures refer to her Nigerian roots and international issues. She is one of the winners of the memorial for Ken Saro-Wiwa in London. Douglas Camp constructs large-scale sculptures - she was one of the short listed artists for the Fourth Plinth in 2003. She has collaborated with Ground Force to create an African Garden for the British Museum, which participated in Africa 05. She exhibits internationally and nationally.
at April 10, 2016