By Tajudeen Sowole
Chinze Ojobo's signature and her kind of work, which faintly leans towards craft are obviously unfamiliar on the Lagos art scene, But her entry into the city's art landscape with a solo exhibition titled Unfinished Business, held at National Museum, Onikan, reminds one of the loud styles and techniques common among artists in Lagos some decades ago.


Based in Abuja, Ojobo has two sides to her work, so suggest the displays at Unfinished Business. These include a set of work that look like sculptures for museum pieces and a group of mixed media on canvas. Two wall relief sculptures, Journey of Life and Social Media, made from jute and fabric are, in every sense of it, the kind of works that would fit into a contemporary or modern museum.


Most salient of the two works within the context of contemporary challenges in the way technology affects humans is Social Media. A couple sitting at the table, with each concentrating on handset of electronic gadget loudly speaks to a lot of people whose life are hooked on such. And in the future when the situation degenerates further than what it is currently, a piece like Ojobo's Social Media would remind people how far back in time humans have surrendered to machine.


The artist seems to be conscious of the fact that some of the pieces are deliberately concptualised as museum pieces. "My choice of National Museum as a venue for my first solo in Lagos fits well into the kind of works I am showing," states Ojobo during visit to see the works, a day after the formal opening.


Thematically, Ojobo's Unfinished Business is based on the plight of the girl child in Nigeria. And still on the elaborate pieces, the artist adds Save Me, the work in which she argues that "all interventions of governments at different times have not achieved their aims" in addressing the developmental challenges of the girl child.

In a set of 3D figural she titles Preserved, there appears a state of young women taking up the battle on their own. But Ojobo argues that "the society should be fighting for the girl child and not them doing the fighting" She cites quite a number of phrases such as "woman right" and "legal right" that seem more like mere political statements in the so-called efforts to rescue the girl child.


Rightly or not, the plight of the girl child appears to have enjoyed so much attention and hype - even beyond Nigeria. But when a Lagos street hawker of bread, Olajumoke Orisaguna strayed into the runway of modeling career, the sound of advocates of fair opportunity became louder, some months ago, particularly when the issue was about  women empowermnmet.


With Unfinished Business, Ojobo continues with the Olajumoke phenomenon from where photographer, T.Y Bello had started. In a massive mixed media Seed of Potential, which the artist discloses "is inspired by Olajumoke, the model" so much about giving the girl child a fair opportunity to excel continues. Again, the size of the work, which is that of a figural of nursing mother, done in cubic collage, perhaps stresses the artist's energy in elaborate application of materials.

If works inside the immediate room of the gallery are not the regular collectibles, the set of pieces in the other section would fit the common appreciation tastes of most art lovers. However, in a Lagos art landscape where the dynamics of appreciation has little room for some kind of relief on canvas, Ojobo's mixed media paintings that feature embossment technique would need more than aesthetics to win the red tags. 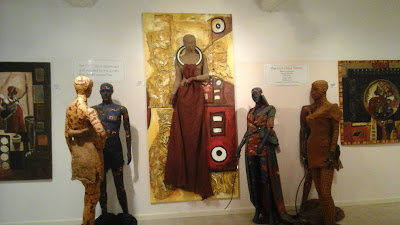 Trained at University of Nigeria, Nsukka, Enugu State, Ojobo, according to her bio is widely traveled, and has featured in "over 41 art exhibitions, including six in Hollywood, Bulgaria and London."

With additional training in Interior Designing, she was commissioned to do quite a number of embellishments in Nigeria. Two of such, reads her bio, included built and furnished the first Communication Museum in Nigeria, in Abuja, 2006; as well as designed and built two cinema halls and lounge for the National Film and Video Censor Board (NFVCB), Nigeria, 2008.

'Chinze specialises in painting with acrylic on jute,' part of her bio states. 'She uses pieces of jute on burlap to texture either the canvas paper or velour.'
at April 03, 2016