With Thought Pyramid Centre, Abuja Sets Out For Art Hub-City

By Tajudeen Sowole
When a modest art gallery space known as Thought Pyramid Gallery emerged on the landscape of FCT, Abuja in 2007, it appeared like an odd flower springing up in the middle of a desert. About eight years later, the gallery has germinated Thought Pyramid Art Centre, which is leading the city of Abuja through the path of art destination for Nigeria, an identity that Lagos has monopolised for many decades.

Founded by curator and art gallery entrepreneur, Jeff Ajueshi, the modest concept of 2007, which took off inside a small and rented shop along Wuse II, is currently the biggest art business with its own one storey facility known as Thought Pyramid Art Centre, erected along Libreville Road, Abuja. Apart from promoting works of African origin in its sprawling gallery space, which occupies both floors of the building, the centre also creates opportunity for young art enthusiasts to attain professional status.

The emergence of Thought Pyramid in Abuja in its current forrm did not come as a surprise to those who have been tracking Ajueshi's passion for art promotion long before the centre sprang up. Ahead of his Abuja venture, Ajueshi had, quietly, established a facility known as Foundation for Arts and Creative Training (FACT), as art residency in Oghara, Delta State, South-south of Nigeria. According to him, the project has been "positively impacting the unemployed youths in the Nigerian Niger Delta in the area of empowerment."

As the Niger Delta facility seemed to serve as the taking off point of his dream, enlarging it in Abuja was an easy task. He explained how he responded "to the need for a purpose-built space for artists and art lovers to interact." So, in the third quarter of 2014, Thought Pyramid Centre got its own facility completed in two floors.

It took a passionate lover of art on a marathon art appreciation that dated back to his childhood period for an idea as ambitious as Thought Pyramid Art Centre to be sowed in a city like Abuja. "I have always been very fascinated and almost obsessed with visual images and bright colours." Art, he stressed, has been a natural extension of his "obsessions with colours, shapes, and causal chains." As a resource person, Ajueshi's adventure in the business of art include the Children Art Club, Catch Them Young Initiative and Life Drawing Platform.

Beyond aesthetics value, Ajueshi claimed he always sees art more broadly. "Art stimulates involuntary or conditioned psychological, and may be even physiological response. Embedded in art forms are the basic craving for deciphering puzzles, or finding a pattern, or attributing visual connotations to abstract ideas, or being humbled or overwhelmed by experiencing something 'new'." He however cautioned that artists are not exactly saddled with the task of invention. "But art transcends the sphere of algorithms that makes the creation engrossing. Most importantly, these traits surpass humanity." 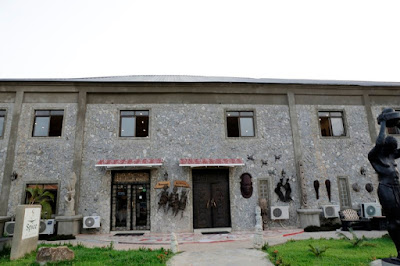 Born into the family of Chief I.T. Ajueshi of Oghara in Ethiope West Local Government Area of Delta State, the art gallery tycoon disclosed his personal relationship with art and how it has energised a wider view of life generally. "What we see depends on how we believe the world to be structured or where emphasis resides. For example, the perspective you see the sun, or the horizon, or how light reflects, or the colour of a sunset. Each viewer has his or her own lattice upon which to knit pictures, some of the common fabric, much of the one-off yarn, unique, only accessible to the viewer."

Across generations, Ajueshi has, directly or indirectly handled  works of quite a number of artists, living or departed. And as a gallerist, his experience cannot be underestimated. Generally, an artist, he noted, "creates stimuli, for whatever reason." However, the approach, for each artist defines the direction and perhaps identity. "Some may want to convey something very specific to the viewer, while others do not. Generational shifts in conceptions of the world are likely over time to depreciate the resonance intentional artists can achieve with their viewers."

Between art as a business and passion, Ajueshi seemed not to draw any line. "It will interest you to know that ever since I left school, it is this business of art that I have found myself indulgingly engaged in; I have been involved in extending the frontiers of art in this country in my little way, and I have also been living by it, in economic terms. That is why it could only be worth the while partnering us in any practical area of art to give more creative value to everyone who wishes to appreciate it."

And in a country such as Nigeria where true art appreciation is not widely understood, leading to importation of prints of known and unknown artists, the challenge of purist identity is one of the areas that Thought Pyramid has to contend with. "I can say I had made any switch, though there have been an avalanche of challenges at different points. I think that one of the biggest challenges of my continuing on full scale, and of my being in a full-time art business now is the pressure of competing with the big money stores and cheaply made items brought in from other countries. Unfortunately, too many people have not developed an appreciation for handmade artistic creations. Meanwhile, they tend to do comparison shopping between factory-made and frankly, inferior works and those created one at a time by an artist who adds touches that no manufacturing process could hope to capture."

In a dynamic competitive space between traditional gallery and digital outlets, Thought Pyramid has also found a balance. "With the way marketing is trending, it is wise for us to make a constant effort to stay on top of traditional as well as social and digital strategies to broaden our audience. Change for me is intensely personal. I knew that for change to occur in any organization, each individual must think, feel, or do something different. So, I had to manage the change myself in a way that it was not like operating a machine or treating the human body of one ailment at a time. I realised that engaging in activities involved working with a fixed set of relationships. For me, the proper metaphor for managing change is balancing everything.
"You can see that most organisations today find themselves undertaking a number of projects as part of their change effort. An organisation may simultaneously be working on a number of ideas such as process reengineering, employee empowerment, and several other programs designed to improve performance. But the key to the change effort is not attending to each piece in isolation; it is connecting and balancing all the pieces. In managing change, the critical task for me is understanding how pieces balance off one another, how changing one element changes the rest, how sequencing and pace affect the whole structure. And that is exactly what I did in my switching from what I was doing before to running the art business, and the same ideas are also applicable here, when we have a few things to focus on. Do not forget that poetry of ancient Persia is full of bridges. In the works of Rumi and others, metaphors are the bridges of art, in the sense that they unite two seemingly irreconcilable things. They give people a route to make sense of an alien world or concept by relating it to something familiar. They illuminate by association: interestingly, the bridges also represent journeys between different states of being, rather than just a means of getting from point A to point B. That idea of two cultures stuck at either ends of the same bridge is what I applied to art and business today. Today’s most obvious examples of art and business overlap admirably, but they also thrive because of an uncomplicated fit between my audience for the business and the artwork."
at February 07, 2016