By Tajudeen Sowole
Despite being regarded as the most-documented living Nigerian artist, Dr Bruce Onobrakpeya keeps expanding the literary appreciation as another book Masks of the Flaming Arrows converges some of the top names in the art academia to appropriate the artist's career of over five decades. 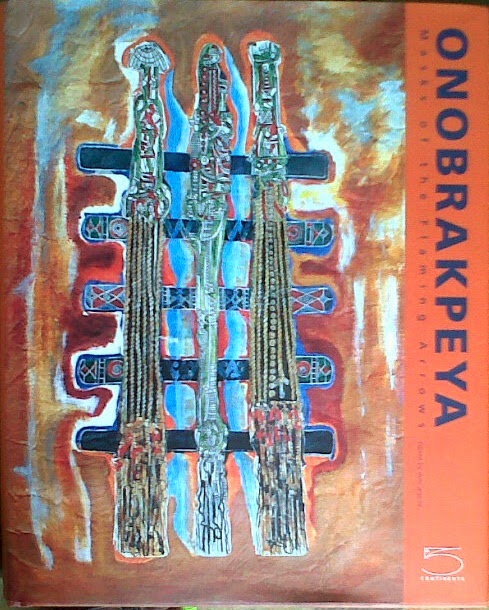 Cover of the book

Edited by Prof dele jegede, supported by Ford Foundation as well as Development Alternatives and Resource Centre, the 399 pages hard cover book is published by 5-Continents.

As crucial to the volume of pages and deepness of the individual scholarly input is to a strong appropriation of Onobrakpeya's trajectory, visual assimilation of the over all contents is well respected. In fact, the pages of the book are highly populated with images of master pieces of the artist's works across genres and periods.

For jegede, Onobrakpeya is a familiar subject. Apart from presenting the lecture tagged Onobrakpeya: The Legacy, at the second edition of Yusuf Grillo Pavilion Art Fiesta organized to celebrate the master printmaker, the art historian has, severally, proven that he is a consistent researcher on Onobrakpeya subject. Jegede, a Professor of Art History at Miami University, Ohio, U.S., has been tracking Onobrakpeya since 1992. The historian's vast knowledge of the artist's work, no doubt resonates in the compilation of 10 other reviews and critiques by authors from Africa and the Diaspora as crucial contents of Masks of the Flaming Arrows.

In the early pages  - after Preface, Foreword, Artist's Notes and Introduction - under the heading Rumination on Onobrakpeya Bruce Onobrakpeya: the. Legacy, jegede argues that patronages energise artists as well as enhances a nation's history. He cites the examples of ancient and pre-Nigeria nation state art such as the Nok, Ife, Benin and Igbo Ukwu objects as some of the windows from which the people's history is better viewed and blossom beyond the period when the works were created. The scholar however warns that "patronage is vibrant only when there is a coterie of individuals or entities whose unbridled love for the arts is matched by the wherewithal and determination to exert an affecting presence."

The much-celebrated or controversial sobriquet 'Zaria Rebels' given to a group who were among the early sets of pioneer art students of Nigerian College of Art, Science and Technology (NCAST)  Zaria, expectedly,  resurfaces in jegede's writing. Recall that Onobrakpeya was one of the members of the Zaria Arts Society and students that graduated at NCAST in 1962. Despite volumes of works written by critics and art scholars, over the decades, on the Zaria rebels' subject, jegede appears dissatisfied with the directions of most writers. Something has been missing; "we have not adequately contextualise Zaria." He notes that the Zaria group demonstrated an allergy to neo-colonialism." In fact, jegede cites, for example, how the young artists were not impressed with the star artist of that period, Ben Enwonwu's thematic direction. The young Zaria students, according to jegede were not impressed by Nwonwu's "coolness with colonial officialdom and fell that he was not a strong advocate of indigenising the arts.'
Members of the Zaria Arts Society included Uche Okeke, Yusuf Grillo, Onobrakpeya, Demas Nwoko, Simon Okeke and Odechukwu Odita.

It may not exactly be an exaggeration to argue that Onobrakpeya has, through his art, promoted Urhobo culture more than any other individual of his generation.  The artist's passion for his native Urhobo culture perhaps inspired the lecture titled Accessing Culture Through Art; Bruce Onobrakpeya on Urhobo Myths. The text of the lecture, which is reproduced as part of the book’s rich contents was given by Okpako on November 8, 2012 at the Institute of African Studies, University of Ibadan on the artist's birthday art exhibition.
Probing deeper into the artist's Urhobo themes, Filani, in. his presentation published in the book notes that "in order to understand and appreciate Onobrakpet's works, background knowledge of his socio-culture religious and educational influences required."

For Agberia who has dedicated a greater part of his academic career studying Onobrakpeya, the artist's most profound legacy, the Harmattan Workshops, which hold avery year at Agbhar Otor, Delta State, Southsoutth of Nigeria is his focus.

Stating that the emergence of Onobrakpeya and the other members of his Zaria. colleagues "redefine modern Nigerian art in diverse ways," Ugiomoh distills the artist's form as a main asset that stands his work out in the crowd.. Further in his paper titled Bruce Onobrakpeya's Art: An Analytical Approach to the Configuration of Form, Ugiomoh explains how the artist's work oozes in character and form. "The second most important factor that gives character and forms to Onobrakpeya's work is the employment of harmony variation enacted through organised variation of similar things- and at times the same things.”

In her critiquing of quite a number of Onobrakpeya's works that cut across the artist's periods, Oyelola, under the heading The Earth As Anchor to the Spirit in Ascent, describes the artist as  "both conservator and innovator, opening our eyes by the skill of his hand."
Reviewing Masks of the Flaming Arrows during the presentation at Ford Foundation office in Lagos, Prof Ola Oloidi stated that the book "is highly educative." He therefore recommended it to "students of art, sociology, anthropology, religion, political science, African Studies, Mass Communication and all those who needs developmental inspiration."

Onobrakpeya disclosed to the audience that the book was scheduled to be launched during his 80th birthday, in 2012. He however insisted that the book is still "the greatest birthday present I have ever received."

And as prolific as the artist is so revered, his motivation in creating works, he explained is when such works are properly documented, particularly in book form. He told everyone who has contributed to the publishing of the book that "you have created a master piece far greater than any individual pieces which the book holds together."

The occasion also provided opportunity for the artist to revisit the incoherence of government’s policies on the arts and culture. "I like to use this opportunity to remind Mr President of two very urgent needs that will move our art forward. The first is the erection of contemporary art galleries in principal cities in Nigeria. The other one is the ratification of Nigerian Cultural Policy."

During the celebration of Onobrakpeya at 80 two years ago, a major art exhibition titled Ore Idjubili (Jubilee Festival),  held at Nike Art Gallery, Lekki, Lagos, led several other similar shows organized in Nigeria and the U.S. to mark the master printmaker’s birthday.

Noted as the artist’s first solo exhibition 1992, Jubilee Festival condenses 50 years in the career of his career and perhaps provided academia and critics an opportunity of deeper study of his art.