With 'Being and Becoming', Orimolade drags art into psychoanalysis

From the complex subject of man's state of mind, Odun Orimolade digs out visual interpretation of western and African scientific beliefs.

This much is loud in her solo art exhibition, Being and Becoming, which is currently showing, ending on June 10 at Art Twenty One, Eko Hotel and Suites, Victoria Island, Lagos.

The show also raises the bar in the new consciousness of Nigerian Avant-garde: Orimolade confirms that expansive space is compatible with contemporary expression of artists as noticed on the Lagos art space since the last half decades or little more.

While critics may not be comfortable with the notion that art appreciation is being confined or rated based on the size of a work of art, it appears that ؛massive is art mentality'  is the tide that artists, promoters and curators would not want to swim against. Even at the entry point of new artists such as art competitions, huge is the key word to win big prize.

But in fairness to Orimolade, Being and Becoming is not exactly about ‘huge is art.’ Just about two or three works, including a roof to floor installation titled Igi Eleso, which shoots from the distance extreme end of Art Twenty One space and a dark mural of floating illusion tagged Plausibility at right side of the entrance are clear enough on the art for size trend.

As a body of work Being and Becoming harasses one's sense of appreciation with the volumes of the wall pieces. Individually, the abstractive contents of each work stresses  Orimolade's passion for unseen subjects such as fantasy and state of minds. Recall that in October 2006, she had shown Facets of a Psyche at Terra Kulture, Victoria Island, Lagos.  About eight years after, the artist's thoughts rendered in drawings, paintings and sculpture as well as relief, in some cases, also explore the Yoruba perspective along western scholars' theories of psychoanalysis، fantasy and real state of minds. Sectionalised into Awamaridi, Blood and Bone, Space of Secret, Transcending Series, Igi Eleso, and Awofelebonu, the images though appear to articulate the abstractive nature of subject like.study of the state of mind, but non-inclusion of illustrative representation confines  the presentation into academic sphere. Understandably, if the themes are “unseen,” the images are perhaps best presented in abstraction and subtle representational style she describes as “flowing figurative.” 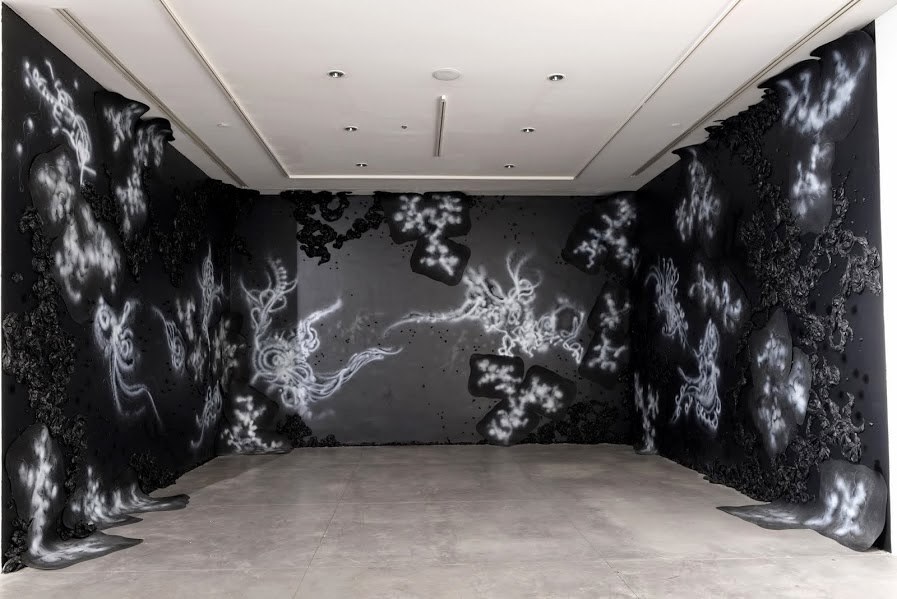 However, there exists a duality of contents and appreciation, which brings in a balance. For those who are passionate about the infinite and complex world of psychoanalysis, the set of images under Space of Secret might just be of interest.  Some of such works include Unheard, Unseen, Tinu Eni, Within Sphere, Emanating and Seranko Seniyan. Softening the air in the loaded walls are the 15 set of works that populate the left side of the wall. Inspired by the work of a twentieth century chemist and anthropologist, Paul Julien, the mixed media of paintings and drawings, Orimolade explains, represent the scientist's "archive of images generated" in Africa during his expedition on the continent.

While Orimolade attempts visual probity of the scientist's photographic images about blood and bone research - clearly in an academic tone - the  flavour of aesthetics are unmistaken. Despite the importance of the anthropological subject that inspired the works, the aesthetics value and essence of art is strong.

In the current era of art appreciation that is widening the space beyond wall hangings and collectibles, every artist seems to be testing the waters of contemporaneity, within installation and performance medium. For Orimolade, an installation, Igi Eleso (Fruitful Trees), is a medium to flaunt her creative ebullience.

Orimolade, a lecturer at Yaba College of Technology, Lagos is no doubt a follower of great thinker, Sigmund Feud, so suggests some of her works that look like materials used by late renowned British filmmaker, Alfred Hitchcock in directing those chilling movies. But she argues that nearly everyone who has consumed western culture has tainted “contemporary idea of fantasy influenced by western psychology.”

Documentation of native African psychoanalysis may not exist in the academic sense of it, the Yoruba perspective, Orimolade notes, is worth an attention. “Yoruba belief system accommodates the use of the other realities in various capacities to order physical responses.” She adds that such belief brings “a kind of equilibrium to the negotiation of life, which can temper one’s responses to everyday annoyances and upheavals.”

Apart from creating an atmosphere where aesthetics and academic or high intellectual values of art meet at a common space, Being and Becoming challenges the confinement of art appreciation. And of note is that The body of work is so eclectic that each of the installation and painting/drawing could have come from as many artists as sectionalised. In fact the Orimolade that followers of her oeuvre know exist in the set of wall pieces under Blood and Bone.


Still exploring the Yoruba perspective, this time as a medium, Orimolade implores ewi (mono-narrative) in the poetry-like rendition for the performance version of Plausibility. “The performance is a tangent from the big drawing. It is like one of the many tiny bubbles in the drawing what could be and how it is impossible to fathom or limit.”

The complexity of digging into the unseen and unknown is explained in the artist’s statement. “We take account and can follow the progress of developing these innumerable aspects of our existence beginning from the point of the unknown, there is the travel through a mass of information that returns us right back to the point of the unknown. It becomes difficult to question the unseen other than to begin the cycle of research again.”

As an artist, digging into the science of unseen state of minds and contextualizing same in imageries, she says, is an effort in trying to “machinate emotional intensity and spiritual reaction through an exploration of the biomorphic, flowing figurative and abstract modes.”
at April 12, 2014