From his last solo art exhibition titled My Experience, Funso Omojola continues to reflect on his sojourn into the creative business of visual arts.

Next is another solo art exhibition he titled Unseen Expressions, which opens from July 13 ending 27 at at Yusuf Grillo Gallery, Yaba College of Technology, Lagos. Almost like a series of his last show, he says the new outing is a revisit “of my perception of art when I just came to Lagos, newly”.


With over two decades of studio practice in Lagos, he now confessed that his joy and passion for art before his arrival in Lagos in 1987 was far from “colourful”. Art, he said, “was beautiful in monochrome, but never thought it could be expressed in colours”. 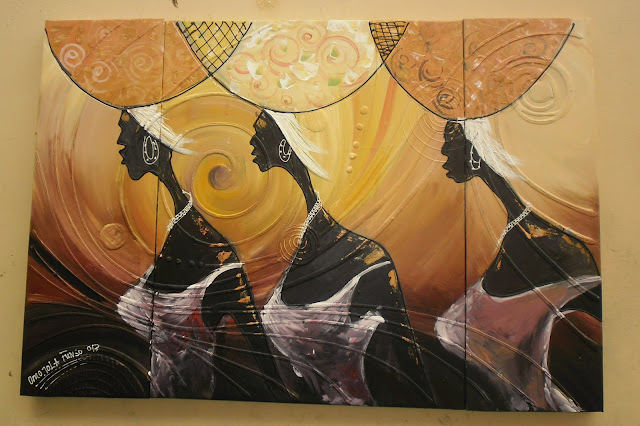 Though he argued that thematically, one of the over 40 works for the exhibition, a panel of 25 miniaturised canvases in cubic shapes and embossed images is the titled piece, another work, The Land is Green seems to explain the concept of Omojola’s Unseen Expressions better. It’s a decorative portraiture of an unidentified lady sandwiched by two panels inscribed with flowers. The works, he says, supports his argument that “my art is not just about me alone”, but getting people involved”.

For his choice of the titled piece, however, the embossed technique, which he disclosed “was achieve though acrylic in a relief form”, asserts his seemingly sculptural quality, even as a painter.


On his technique, lines, he explains, play a great role. For example, in Crossover, acrylic on canvas the five paneled, he says “create the beauty of my crossing over with a better day in moonlight shape”.
And what has the lines got to do with it? “I  used the lines and wave of colour for both the aessthetic  and message of movements”.

And comes the sculptural characteristics of his paintings in Face of Lagos, an acrylic on canvas in relief of five compartmented pieces that depicts the beauty of Eyo masquerade in Lagos.  “It’s my style of arranging panel together create beauty of mind, so that culture is appreciated and the people of may be able to relate with the meaning better”.

From the archives comes a set of large canvas populated with miniatures of legends and popular quotes. Some of these images include Mahatma Gandhi, Julius Ceaser, Obafemi Awolowo, Prof Wole Soyinka, Nnamidi Azikiwe and Maclom X.And quite of interesting is that Omojola’s idea of words on marble cuts across ages and generations. For example, the artist finds, Tupac Shakur’s ‘For every dark Night, there is a brighter day’ worth listing among world’s words on marble.

About a decade before Shakur realized the potency of resilience, Awolowo, according to Omojola’s assemblage of prints had said: ‘After rain comes sunshine, After Darkness comes the glorious dawn. There is no sorrow without its allay of joy; there is no joy without it admixture of sorrow. Behind the ugly terrible mask of misfortune lies the beautiful sooting countenance of prosperity. So, tear the mask”.

And quite another interesting print of former Hollywood sex symbol, Marilyn Monroe who argued: ‘I don’t know who invented high heels, but all women owe him a lot.’
Omojola’s strength in intellectual and painting content is not exactly in the decorative and reproduced prints of iconic images, but in semi-abstract impressionism, so suggests quie a number of works expected to be on display during the exhibition.
at July 12, 2013