On African art appreciation they stand 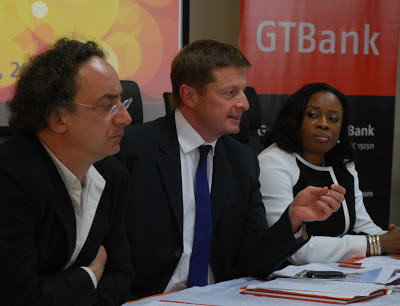 These areas of interests were highlighted during a briefing by the representatives of GTBank and Tate at the bank’s new head office in Victoria Island, Lagos. It was the third of such gathering, involving Nigerian art community and members of the media, which offered the partnership an opportunity to restate that indeed the rest of the world is waiting for African art to be a big player on the global stage.


The partnership, which took off with four artists selected across the continent continues with curatorial, funding for Tate and regular art events across Africa.

First unveiled in Lagos last year, and presentation of the project’s curator, Elvira Dyangani Ose, done last March, the partnership will take a multi-facets form. Ose, is a well-known curator and scholar in the field of African art. She will take up her post next month and curate the GTBank annual project for Tate Modern as well as contribute her expertise to the collection and Tate programmes, the organizers explained.

The two partners are not new to African art and artists. Recent of such partnership was the involvement of GTB and Tate in the Yinka Shonibare’s celebrated installation, Nelson in Ship mounted at Trafalgar Square, U.K.

Lola Odedina, General Manager and Head, Communication and External Affairs listed the content of the partnership: “the creation of a dedicated curatorial post at Tate Modern to focus African art; establishment of an Acquisition Fund to enable the gallery enhance its holdings of works by African artists and organization of an a yearly art project in London or in African cities.”

She recalled that last year, progress was made in the collection aspect of the partnership when the Africa Acquisition Committee (AAC) was launched. Chaired by Tutu Agyare and Robert Devereux with 26 other members, including Bolanle Austen-Peters and Prof Oba Nsugbe, the committee has been saddled with the task of assisting Tate in collecting African art.

Odedina disclosed that the art events wing of the project takes off with Across the Board next month in the U.K. as well as Accra, Ghana and Douala, Cameroun in 2013. In 2014, the event berths in Lagos. Odedina stated: “the three main purposes of the projects are: the creation of platform to engage with local art scenes and its protagonist, curators, artists, scholars and institutions, enhancement of Tate’s collecting activities and to generate new dynamic and experimental types of programming at Tate.”
Speaking on how contemporary African art can redefine international art history, the Deputy Director, Tate Modern, Alex Beard noted that “early in the 1990s, it was possible to show without African art.” He however argued that with the increasing dynamics of artists within and outside the continent, “it is no more possible to show without African content.”

Three of the top artists present at the briefing included Nike Okundaye, Abiodun Olaku and Alex Nwokolo. While commending the partnership, Olaku urged for an extension of corporate support to the art schools in Nigeria. He noted the alarming rate of depreciation in art studios of higher institutions.

Two of the themes to be in focus at the yearly events, he said would include Interdisciplinary Practices and Politics of Presentation.


For Okundaye, a growing army of artists needs to be reassured of their future. She argued that “with over 30, 000 artists in Nigeria more support will go along way in assisting” the young professionals.