For Tomorrow ... A visual recall

BY TAJUDEEN SOWOLE
VICTOR Ehikhamenor’s recent show, Crossing The Line, which was part of Ugoma Adegoke’s project, Remember for Tomorrow, a month-long event of visual art, poetry, lecture, short film and music, gave an insight into the different conflicts that had threatened the nation’s existence from the time of independence.
Held at Life House, Victoria Island, Lagos, the show was a  display of pen and ink drawings, and works that reminded the viewer of war and conflicts in Nigeria. Simple as the pieces were, they instilled fears and caution.
In his familar semi-abstract rendition, Ehikhamenor’s played with titles that were not so pleasant, even for those who never expereinced arms conflict — they were really spine-chilling. Some of the titles include the Refugee Series, Fear, Good Bye My Son, Hide, The Recruiters Are Coming, The Orphan of Our Wars, Till Wars Do Us Part and Dog of War.
But these works were not intended to haunt anyone, Ehikhamenor said, as he chatted with guests in the Bloom Gallery, Life House. “They represent what we went through in the past. Several decades after independence, Nigeria is still crisis-ridden.”
The works, interestinglly, fitted well into Adegoke’s vision, making guests to believe that Ehikhamenor was actually part of the idea from the outset. 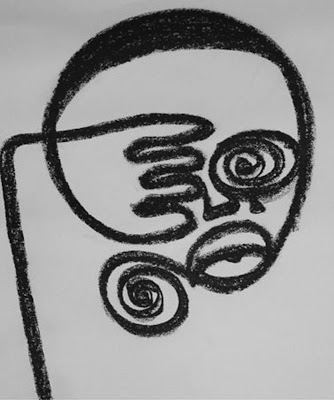 “Works with such themes happen to be from the pool of works I have in my work-in-progress, and when she told me about her concept, they came so naturally available,” he quipped.
And why such scary themes? These are reality of our history, he said, warning, “if we don’t remind ourselves, history will repeat itself.”
Crossing the lines, metaphorically, is usually the beginning of conflicts, either in daily social, family, formal or informal exchanges. However, such exchanges, he agreed, is volatile and, perhaps, leads to war when politicians are not mindful of their speech, and failure of opponents to manage such information, devoid of mischief and blackmail, as currently seen in worrisome race for 2015, barely a year after the last election.
For the artist, there must always be respite, irrespective of the crisis; so, he tones down the themes in such works as Reconstruction, Redistribution and Recollection.
Bringing the past to bare with the present appears to be one of the artist’s strongest points, as he dsicloses that Crossing The Line is a prelude to a bigger show ahead.
Adegoke also agreed that the best way to learn about our past such as colonialism and civil war is to talk about them. Tagged, The Life House's First Historical Project, Remember for Tomorrow, it uses visual art, music, poetry and other aspects of arts to ponder on our history and referencing the multi-faceted ‘lines’ that were crossed during pivotal pervasive events such as the Kano riots of the 50s, the Tiv uprising of the early 60s and, finally, the Nigeria Civil War, which lasted from 1967 to 1970.
Ehikhamenor’s biggest show since he returned to Nigeria few years ago from his base in the US, is Entrances and Exits: In Search Of Not Forgetting. Held at the Centre for Contemporary Art (CCA), Lagos, for about one month, the show was on relics of ancestral polygamous family, village shrines and other creativity related content, which the design artist stumbled on during a visit to his village, Udomi-Uwessan, Irrua, Edo State.