THAT Andrew Ikechukwu Emueze has been on the art circuit since 1995, and yet not as visible as those with fewer years in post-graduate practise, for example, also shows his nature.


In about 10 or more of his works, one could see so many artists; styles, techniques in various shades and tones that are hallmark of group shows, all in one artist’s skill. 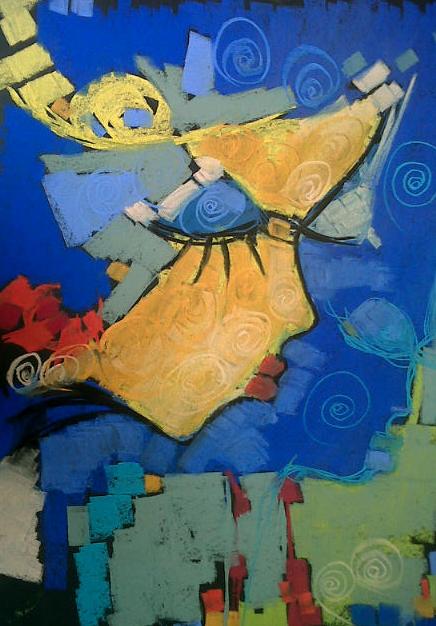 He declares, “my mode and concept dictate how I paint. For me, style is de-emphasised as the message is the most important thing.”


And his rendition also shows that he is a subtle social critic and commentator on canvas. For example, in an abstract facial emphasis of a lady titled Lies, Emueze explains the effects of lies on facial expression. “It’s a portrait of the lies we tell to cover up for things that we lack,” he states.


In works such as She and Confrontation, it’s more of the artist flaunting his prowess of using lines to enhance his painting. Though in black and white, and highly stylised, She expresses the glory of womanhood from the artist’s concept.


“The work is a dedication to womanhood; to my mother,” Emueze discloses.


The artist also employs the same skill in Confrontation, where two women are the subjects of his creative expression.


WITH over 15 years experience as a graduate, the artist is aware of what is needed to make impact in a society that is finding it difficult to embrace art. To this end, Emueze uses his real life encounters to sketch works that will make impact. This is noticeable in No Regrets.


He continues to explore the human element in Friendship and You and I (Togetherness).
From the perspective of a creative professional, he notes, “there are times in life when we fall through our own deeds and decisions and with regrets we remain down.”


On relationship with others, he argues, “there is a friend that sticks closer than a brother, and it takes such a friend to look straight in your eyes and tell you that you are stupid, when truly you are.”


DESPITE the lack of aggression in the manner he markets his works, Emueze has gradually established himself as a force to be reckoned with on the scene with the solo shows and many others he has featured in.