Tracism… From Francophone with love
BY TAJUDEEN SOWOLE
WITH his participation in several art events in Nigeria, Beninois artist, Midahuen Yves, is becoming a familiar name in the country.
Only yesterday, his solo show titled, Woezon (Welcome), opened at Quintessence Gallery, Falomo, Ikoyi, Lagos.
Simply called Midy by his Nigerian colleagues, the artist is showing a combination of paintings as well as works, which blend painting and printing on a thicker surface than the usual canvas.
Midy’s painting-printing technique is not exactly new to the art community, though he is just showing them here for the first time.
At the last edition of the yearly Harmattan Workshop in Agbarha-Otor, Delta State, his technique was one of the revelations of that gathering. 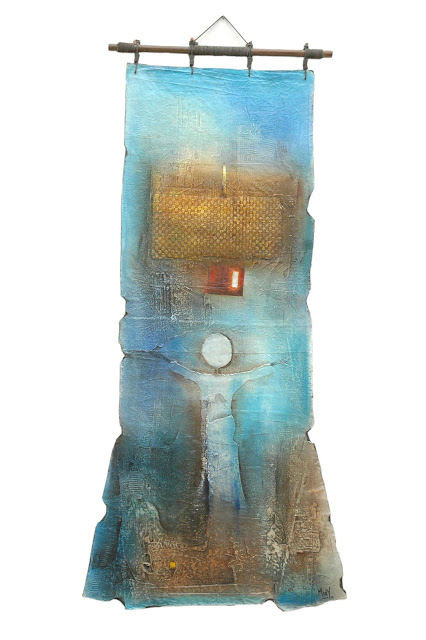 For this show, he has brought in his dual-cultural backgrounds of Togo (mother’s country) and Benin Republic to bear on his technique in such works as United Family, Through the Light, Living Together, Satisfaction, Humilitie (Humility) and La Sage.
Aside the thickened canvas, the ancient-like hanging pattern of the works, which complements the aging surface, is also a strong characteristic of the artist’s form.
This, he explains, is an adaptation from “my mother’s native culture of using rope to keep things for safety, mostly in hanging forms.”
From this comes the inspiration for the theme of the show, which he says, “is about bringing people of different cultures together.”
His technique, he christened tracism, he recalls was achieved, not as an experiment or direct research, but just stumbled on it whilst working on one of his regular canvas works.
Midy’s adventure across cultures; from Benin Republic to Togo, Ghana, where he trained as artist, and several visits to Nigeria appears to have crystalised into this show. In fact, Nigeria has influenced the body of work more.
He says, “I produced most of the works at the Harmattan Workshop.” 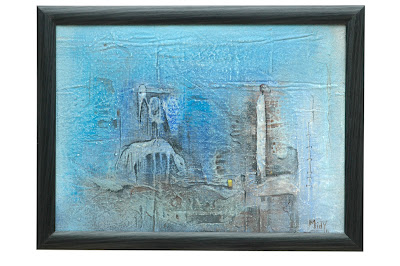 After the first phase of the workshop ended, the artist went back to attend the Harmattan Retreat. “Going back allowed me to work better and complete what I started.”
TRAINED at College of Art, University of Science and Technology, Kumasi, Ghana, Midy says, Nigeria is almost like a home.
In the last six years, he has always felt good coming here. This, to him, is the reason for the theme, as “it’s good for people to feel at home wherever they go. It has indeed transformed my life and I have been able to express it in my works in this show. We have to learn to welcome people.”
Since his last outing in Lagos, his themes have revolved around people, neigbourhood and the environment. Last year, he showed a body of work titled Ablode (Freedom).
From his past techniques are a few paintings that, indeed, show a faint link between the earlier and the current works.
And this commonality, is perhaps, noticed in his passion for earth colours.
In 2008 and 2009, he participated in the first and second editions of African Regional Summit and Exhibition on Visual Arts (ARESUVA) held in Abuja. He also participated in the last International ArtsExpo Nigeria, in Lagos.
Some of his other international shows include the ones he had in France, Senegal, Ghana, Canada, Togo, U.S., China and Cote d’ Ivoire.
at November 05, 2011