Toni Ogunde's Glimpses @ 50… Nigeria in retrospect
BY TAJUDEEN SOWOLE
AS the country turns 51, Toni Ogunde, in retrospection, projects into the future. From the shine and sombre pasts, to the present urban rehabilitation project of Lagos State government, which aims at turning the state to a mega city, as well as other challenges, Ogunde sees a brighter future for the nation.
In Glimpses of 50, which holds at Yaba College of Technology (Yabatech), Art Gallery, on November 1, Ogunde urges Nigerians to celebrate the past. 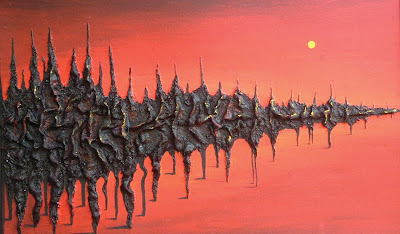 Though, he may not be saying anything new, Ogunde, however, breathes fresh air to the national rebirth discourse.
For example, jute, the most common material in his work, is combined with Ilarun (native Yoruba fork-like comb) in some of the composites to arouse curiosity.
Painterly it appeared, but Ogunde’s Mega City, a skyline crowded with high-rise buildings, is actually built with ilarun on jute.
Really, the Lagos mega city mentality or expectation is either over blown or the state government is just using it to boost its political profile. Reason: the distance to cover keeps widening, daily, due to government’s slow pace at making the necessary environmental changes to usher in a developed city.
And if effective transportation is a factor in modern city, the artist’s hope of the state reaching higher level of development is not really in sight, as public transport is in the hands of the informal and non-organised private sector, just as the government-run Bus Rapid Transit (BRT) is almost like a drop of grain in the ocean.
Ogunde notes, “for those us who knew Lagos of old, there is a tremendous change.” He shares the sympathy most citizens of the state have for the government and as well hopeful that the country will get there, but by a gradual step. 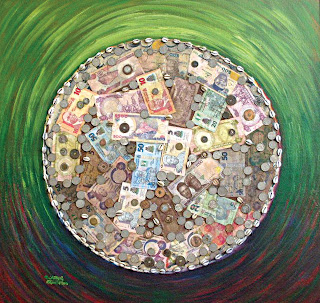 A LECTURER at Yabatech, Ogunde laments the worrisome academic flight in the country’s higher institutions, hence the dedication of Brain Drain to this issue. “Brain drain is affecting the academic environment, seriously,” he laments.
This depletion, perhaps, lends strength to the argument of Academic Staff Union of University (ASUU) on the 70 years retirement age for lecturers. “ASUU is right,” Ogunde argues, noting that the older a lecturer, the better for the institution.
STILL on government’s insensitivity to the people’s plight, another work, African Children, is dedicated to the kids, who loss their lives in the January 27, 2002 bomb blast, which occurred at the Ikeja Cantonment, Lagos.
He takes his audience one down memory lane, and more importantly, on an excruciating journey to Ejigbo, one of the neglected suburbs of the state.
Majority of the people, who died at the Ejigbo swamp, most especially, the kids were fleeing Oshodi – most affected area of the bomb tragedy. If there had been a proper emergency programme or empowered agency, this wouldn’t have happened.
Memories of the past, in his artistic interpretation, is not complete without a look at the country’s currency.
The mixed media, Treasure, brings in the old and new Naira, both in notes and coins. With some of these coins in Ogunde’s work, the wastefulness of the Nigerian government comes to focus.
Several attempts to bring back the coins as part of efforts at checking inflation has failed, Ogunde notes.
He has had over 40 shows, group and solo with his last being Man, Genre in Visual Sensation in 2006 at Didi Museum, Victoria Island, Lagos.
at October 08, 2011