Marcia Kure's fashion explosion in art
BY TAJUDEEN SOWOLE
Sunday, 20 March 2011 00:00
IN two shows, running almost simultaneously, the US-based artist, Marcia Kure, explores two extremes of fashion history to place people’s perception on artistic probity.
The images viewed through soft copies were rendered in mixed media of kola nut pigment, watercolour and good old egg tempera on paper. This body of work, which opened as Fashionable Hybrids, at Bravin Lee Programs, New York on March 11 and ending April 16, confirms the consistence of an artist, who, in the last 10 years has written fashion into her themes. 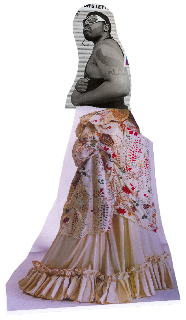 Similarly, digitalised images of her other show titled Dressed Up, which opened on March 17, running till April 23, 2011 at Susan Inglett Gallery, N.Y. juxtaposes cultural and moral values of fashion across generations.
In 2000, at the opening of her exhibition titled Cloth As Identity, held at the Goethe Institut, Victoria Island, Lagos, Kure pierced through the conservative religious mode of dressing for women in a performance and installation show.
Now, living in a country such as the U.S., where the hip-hop culture intoxicates virtually all aspect of life, fashion being the most hit, Kure, with these works, continues to probe into the extremity of fashion.
She says the Fashionable Hybrids evolved from the Dressed Up series. Both, however, take flavours from the Victorian and hip-hop ends of fashion ages. “The Dressed Up series dramatised the visible difference between the two modes of dress and the social worlds they invoke in order to dismantle the usual cultural and social boundaries cloth imposes on bodies.”
More interesting, the artist attempts to drag viewers into probing people’s submissiveness to a mere piece of cloth.
And whatever Dressed Up appears to have left unfinished in this probity, Fashionable Hybrids, attempts to complete or continue.
Quite a number of media such as the “Disney cartoon, Japanese Anime and Manga, medieval fashion, military outfits, and contemporary couture fashion” fused into “pictorial forms inspired by the paintings of Hieronymus Bosch, Roy Lichtenstein, Jan Vermeer, Gustav Klimt, Dominique Ingres and Édouard Manet,” and embossed her thoughts into conception.
The concept, she recalls, was conceived while conducting research at the Smithsonian Archives as a Fellow, in 2008.
Kure argues that though hip-hop fashion embodies and asserts African American creativity and independence in its later metamorphoses, it was absorbed into the hyper-materialism and global capital.

UNLIKE most artists, Kure would not leave her thoughts hanging, particularly on how fashion has, over the years, either promoted or denounced societal decadence.
She takes this comparison to the Victorian and hip-hop ages and notes that “the sense of decorum and gravitas conveyed by haute couture / Victorian fashion belies the colonial violence and decadence of that age; conversely, the near-criminalization of hip-hop fashion fails to contend with the humanity of many of its avatars or their status as respectable global citizens.” 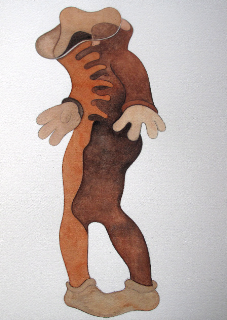 KURE graduated from the University of Nigeria, Nsukka (UNN) in 1994 and later moved to the U.S., where she’s has had group and several solo exhibitions.
Last year, she had a group show,
Esopus 14: Projects, at Esopus, N.Y. Also in
Among her shows are Undercover: Performing and Transforming Black Female Identities, 2009 at Spelman College Museum of Fine Art;         2nd International Biennial of Contemporary Art, Seville; Aqua Art Miami, Aqua Hotel, Miami Beach ; DRAW•ING (dro'ing) at BravinLee Programs, New York.
at September 02, 2011