From the Renaissance in Europe to the American modern era, history has proven that every country's art, most times, is built on the tripod of source, link  and the future. The link, as a major point in African art history connects the  modern period of the immediate past to the current fledging contemporary era.


Gathered here for La Floraison (The Bloom-1), currently showing art exhibition at Alexis Galleries, Victoria Island, Lagos, are some breed of artists whose period of practice falls within postmodern African art, but links the former to the contemporary era. Having tapped from the great depth of the old modern masters in contributing to Africa's vibrant visual arts culture, these 'next' masters have established profound spots in their individual country's art lexicon. More interesting is the fact that most of the exhibiting artsts of La Floraison (The Bloom-1) are mentors to quite an army of emerging talents in Lagos and beyond. With such a crucial spot on Africa's art landscape, it is not surprising that these artists -- whose mastery in their period of practise is not in doubt -- have been selected to make the debut edition of La Floraison (The Bloom- series).

While the mastery of art has no ambiguity or complexity, the definition of who fits into the master status has been a recurring issue in this part of the world. In over two decades of writing about The Arts, and with benefits of keen observation, I have come to the conclusion that each of the two main periods of visual arts - modern and contemporary - exist with their masters, in generational shift.

In the works of Nigeria's founding father of modern art, Aina Onabolu (1882 -1963) and other modernists such as Ben Enwonwu (1917-1994) , Akinola Lasekan (1916/17 - 1972) as well as some of the Zaria artists like Uche Okeke (1933 - 2016), Bruce Onabrakpeya b. 1932, Yusuf Grillo b 1934. , Demas Nwoko b. 1935, among others, a culture of mastery of art had been established in the past one century. Situating an artist in the master's category is therefore incomplete without attaching either modern or contemporary identity, based on the period of practice.

It is important to note the dynamics of generational difference that make up the complexity of modern and contemporary art periods. It is a known fact, for example, that there is no global uniformity of modern art period: it differs from one country or region to another. And when universal definition of contemporary art places its beginning from post-World War II, the guide does not also suggest uniformity. For example, most European countries' contemporaneity took off immediately after the second world world war while in the U S, the late 1960s was still refered to as modern era. As complex as definition and period of contemporary art may appear, Nigeria's, perhaps other African countries'  contemporaneity era and contents, most likely started incubating from the late 1960s/early 1970s.

However, it will be unfair to the purpose of this newly launched exhibition series, The Bloom, to dedicate too much space and time writing about Africa's modern and contemporary trajectory. Basically, the essence of expanding on the art periods is to appropriate the fact that contemporary or modern art is spoken or written in either the content of works or subsisting practice of artist(s) referred at a given time.


For artists whose practices link modern and contemporary, particularly, setting the pace for subsisting and future generation, epithets such as 'next', 'new' or 'contemporary' attached to their 'master' status is appropriate.  But for Alexis Galleries, 'The Next Masters' is the choice of attribute or epithet for its current exhibiting artists.

Expanding their footprints on Africa's art landscape as 'Next Masters' showing in the first edition of La Floraison (The Bloom -1) are: Sam Ovraiti, Abiodun Olaku, Duke Asidere, Edosa Ogiugo, Alex Nwokolo, Segun Aiyesan, Dominique Zinkpe, Zinno Orara, George Edozie, Fidelis Odogwu, Diseye Tantua, Reuben Ugbine, Gab Awusa and John Oyedemi.
In presentation and appreciation of art, the exhibition space plays a vital role. This factor about the importance of a space was obviously not lost to the exhibiting artists, hence surrendering their works to Alexis for the exhibition. Mrs Patty Chidiac Mastrogiannis-led Alexis is arguably, the most active art gallery on the Lagos art hub scene in the context of regular exhibitions since eight years of its existence.  From the first to the last quarter of every year, Alexis' experience of showing artists across generations have accumulated into the current gathering, showing the  Next Masters. As Africa's growing art hub, Lagos keeps generating high value -- in commercial and critical appreciation context -- so suggest several international art events across the world. There is no doubt that Lagos breeds art, artists and spaces that inspire the value of African art in Europe, U.S. and the Middle East. Either at dedicated African art auctions in the U.K or art fairs in Europe and Dubai, the Lagos art hub as a breeding ground plays strong factor.

Each of the artists in this exhibition is showing two works. Apart from exuding mastery of the canvas across medium, particularly in watercolour, Ovraiti has a strong followership on the art appreciation front. His tested-pedigree as an artist include mentoring of young artists at workshops, an experience that spans decades. Ovraiti's expressionism style has endured on canvas for over three decades. The artist brings into this group show 'We Are Stronger Together', a largely cubism rendition that pleads to the conscience of agents of divisionism.
Olaku's brush movements in realism depiction, particularly of exotic and poetic skylines, landscapes and streetscapes keep reverberating the resilience of modernism and traditional form of art rendition. The artist's familiar photo-finish realism in skyline blends the beauty of nature and streetscape in one of his two works titled 'Golden Retreat'. His brushings capture the sun set dissolving into the water in its beautiful gold tone.

A painterly drawing with subtle spice of colour titled 'Social Media Love 2' by Asidere brings forth the artist's consistency in visual commentary. A cerebral artist, Asidere pours out his thoughts on canvas, most times in protest context of an agitator who desires a just society for all, if possible, in the next minutes.

Either in human or animal subjects, even inanimate objects, Ogiugo's strokes generate animated motion on canvas. And being one of the most consistent artists in equestrian subjects on canvas, Ogiugo enriches this gathering of the masters with his remarkable skill in exceptional draughtsmanship.

A delight of art critics and historians, Nwokolo's rich oeuvre of many periods in the last one decade are enough to generate  volumes of review or critique. In a piece titled 'Blue Canopy', Nwokolo presents one of his most successful periods in technique of crowd-effect and optical illusion.
With his mastery of aging the canvas in roughened texture, Aiyesan has taken a revered spot on Africa's art landscape. From stylised and elongated necks, Aiyesan extols beauty in diversity of visual imageries, featuring fashion statements in female head wears.

Apart from using his academic environment to mentor young artists, Oyedemi also inspires others too as regular exhibitor at mainstream art space in Lagos. Also a lover of equestrian subjects,  Oyedemi's 'Duebor Race' series in this gathering explain an artist with experimental journey, though still in his familiar horseback  subject, capturing horse race on high speed.

Zinkpe, an artist from Republic of Benin is not strange to the Alexis' space, having shown here several times. Zinkpe's works for this exhibition steps up the success recorded from his solo titled Mystery, held three years ago at Alexis. 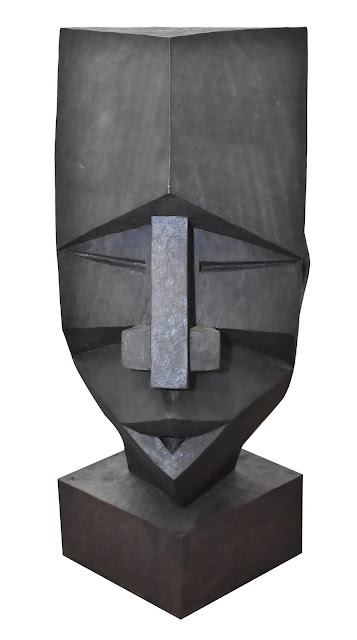 Though he works mostly in heavy metal, sculptor, Odogwu, melts conflating social issues to soften recurring tension in the land. His work for this exhibition.

After stunning Lagos art connoisseurs with his experimental design works last year, Tantua keeps lifting his visual narratives of comic and satire contents. But in this gathering, he is showing a mix of design and painting for each work.

Adding wizardry in wood carving to the exhibition is Ugbine, an artist whose sculpture, always in dark texture, radiates spiritual upliftment.

After making a strong showing last year in the exhibition titled Different Strokes with Philips Nzekwe, it will be a delight to see Awusa again on the Lagos art circuit. Awusa is an artist with great narration depth In visual commentary.

Edozie, an artist whose art derives strength in bold and loud glorification of colours, has added extra aesthetics in representational art. And in one of his paintings titled 'Golden Fish Has No Hiding', Edozie, graphically,  goes metaphorical.

Orara, an eclect whose strokes rove between expressionism and surreal texture is one of the most unpredictable artists that slips from critics' strict pens. For this show, he captures the moment 'When Love Was Blue' in a chilling rendition of the blue colour that swallows the pictorial space.

The Alexis' convergence is no doubt a rare gathering that every lover of art who has premium taste for collection of rare pieces cannot afford to miss. In fact, individually, each of these artists have proven their mastery of chosen genre or style and technique on the exhibition landscape of Lagos and internationally  over the decades.

For being privileged to be part of history by visiting the maiden edition of The Bloom, enjoy and appreciate the premium quality art on display.
-Tajudeen Sowole.