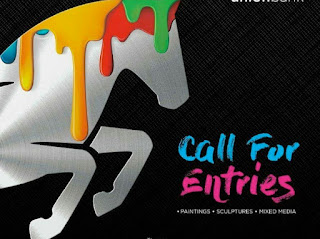 In less than two weeks after the announcement of entries for Union Bank Centenary Art Challenge,  more artists from across Nigeria are already responding adequately.

Sources indicated that the entries are already flowing in for what could be a keenly contested Centenary Art Challenge in September, 2017. Artists have an opportunity to interpret a new concept for Union Bank’s Stallion logo, according to the organisers.


At Mydrim Gallery, Ikoyi, Lagos, the bank has announced the competition as ‘Centenary Art Challenge’ to
embrace art as a medium of contributing to the next 100 years of Union Bank. As a leading financial institution, Union Bank is currently celebrating its centenary.


Being organised in partnership with One Draw Gallery, the ‘Centenary Art Challenge’s entries will be accepted across the country in various regions and a distinguished panel will shortlist the final 100 works, which will compete at the finale, the organisers stated. “Monetary prizes will be awarded to the finalists and the ultimate winners will receive N1 million in the professional category and N250,000 in the student category,” director at One Draw Gallery, Segun Adejumo, said.


Endorsed by Guild of Professional Fine Artists of Nigeria (GFA), the Centenary Art Challenge  is coming after Union Bank redesigned the stallion to reflect a more agile and energetic institution


"Union Bank has a storied history in Nigeria and our 100th anniversary is a unique opportunity to tell our story to different audiences. Artists are storytellers and this competition presents an opportunity for this community to help us tell our story from the vantage of our iconic white stallion,” Chief Executive Officer, Union Bank Plc, Emeka Emuwa said. “We are excited to celebrate the many stories that will come across through the works that will be entered in the competition.”


Head of Corporate Affairs and Corporate Communication, Ogochukwu Ekezie-Ekaidem noted that “Talent development is one of our social responsibility areas and this competition is another initiative for Union Bank to impact in this area. We strongly believe that through the arts we can spur creativity and innovation in young people.”


Adejumo, who is also the President of GFA argued that artists in the country are contributing to the economy, just as “Union Bank has made the right choice in identifying with Nigerian artists’ efforts in contributing to the image of the bank ahead of the next century.”


The bank stated it was marking its centenary in three broad areas: Celebrate, Impact and Lead. In April the bank also announced the ‘Union Bank Centenary Innovation Challenge,’ as a nationwide competition to find and support young entrepreneurs developing sustainable business solutions to solve social problems in Nigeria.