By Tajudeen Sowole
(First published on Tuesday, 27 December, 2005 14:37
POST-late environmental activist, Ken Saro-Wiwa appears like a paradox being spear-headed by his immediate constituency – the literary community.
If author, Prof Femi Ojo-Ade, in his book Ken Saro-Wiwa: A Bio-critical Study, (1999) attempted to place the late Ogoni activist naked before the village square, another writer, Adewale Maja-Pearce in his latest effort, Remembering Ken Saro-Wiwa and Other Essays, New Gong Books (2005), continues where Ojo-Ade stopped.
Maja-Pearce, in his book, which was presented recently, actually sentences his subject in his literary court. The controversial author starts by taking one back to his (Maja-Pearce) days as the editor of the Heinemann African Writer series when, according to him, he first met Saro-Wiwa in the late 1980s. Maja-Pearce confesses that he immediately disliked the Ogoni man. And that later, 1992, in Potsdam, former East Germany, where he again met Saro-Wiwa, nothing had changed. While making bold to state that he never liked Ken’s attitude a bit from day one, the Germany forum, which was a conference of African writers where he says the late writer read to the admiration of fellow writers, revealed another Saro Wiwa – an environmental activist in the making.
"By the time I met him in Potsdam, he had helped launch the Movement for the Survival of the Ogoni Bill of Rights, but I didn’t take this any more seriously than I had taken his literary ambitions. I thought it was probably a scam, ‘419,’" the author insists of his suspicion for the activism claims of Saro-Wiwa. But that suspicion, he continues, was later confirmed. "Later, after he was executed and I started researching this essay, I thought so even more."
Recalling that the leader of the Ogoni-9 whose live was cut short by late Sani Abacha’s hangman had justified his activism mission on a  "Voice," the activist claimed he heard late one night in 1999, Maja-Pearce wonders why it took Saro-Wiwa so long to launch his mission when he realised that Shell Petroleum Development Company 'spelt wicked foreboding’ for the Ogoni people, as far back as 1958. The author further carpets the late writer for robbing the Ijaw leader, Major Isaac Adaka Boro of his place in the Niger Delta struggle.

Saro Wiwa, he notes, "denigrate the reputation of his Ijaw precursor, the enigmatic Major Isaac Adaka Boro, who had already identified the problems confronting the region even as Saro-Wiwa was filling out his job application with Shell."
At this point, Maja-Pearce has a wider field to express his dislike for Saro-Wiwa, as he places Boro’s pattern of the struggle side-by-side that of the former. "There was nothing new that the pipe-smoking writer said about the Niger Delta that Boro did not", the author writes. 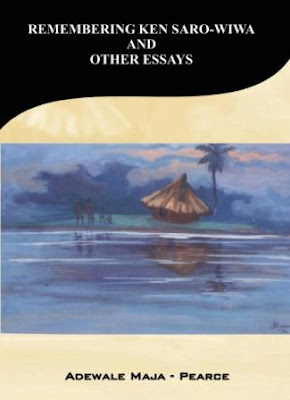 And the difference between the two activists, according to Maja-Pearce was that: "Unlike Saro-Wiwa who claimed to eschew violence even as he excited the disaffected youths to lawlessness in his determination to extinguish all opposition, Boro openly took up arms against the state following his declaration of the Niger Delta Republic in 1966."
But the real sins Saro-Wiwa committed, Maja Pearce continues, was the place given Boro in the late writer’s book. “How on earth did Saro-Wiwa claim in his book, On a Darkling plain: An Account of the Nigerian Civil War, that Boro’s act of waging civil war against the state was a ‘farcical recklessness.”
Linking Saro-Wiwa’s death, three decades later, to his early romance with the military government, Maja-Pearce writes that the late activist starts a lifelong bond with the officers of the Third Marine Commando Batalion stationed in Port Harcourt. "Among those he became friendly with was the then Major Abacha, his future executioner."
Probing further into the character of his subject, the author discovers that Saro-Wiwa’s unhealthy relationship with the Ogoni-4 started from the activist’s rivalry with the most prominent of the tragic four, Edward Kobani.


From the days of the Nigerian civil war to the 1977 election into the constituent assembly, the rivalry between the five thickened, Maja Pearce notes. Saro-Wiwa, he explains, accused Kobani of employing ‘dirty tricks’ to scuttle his, (Saro-Wiwa’s), election into the constituent assembly of 1977.
And the final journey that brought about the infamous ‘judicial murder’ of the late activist was still the same rivalry between the two. This time it was another election into the constituent assembly under Abacha. "As before, Saro-Wiwa and Kobani contested against each other, in contradiction to Saro-Wiwa’s son, Junior’s assertion that his father’s earlier defeat ‘had left him with an abiding distaste for conventional politics’; as before, he was ousted by the one he had publicly fallen out with just one year earlier."

Next in the 306 pages book were the other essays, which include the author’s physical contact with the security operatives in Nigeria and his dilemma in Togo where he said he was detained as well as other politics across the continent.

But in spite of his strong position against the person of Saro-Wiwa, the author, surprisingly, still shares the popular view that the activist’s murderers were uncivilised. In the lead to one of the essays, A Nation of Collaborators, Maja Pearce writes:  "No Nigerian despot had ever flouted civilised standards with such impunity as when General Sani murdered Ken Saro-Wiwa and his fellow Ogoni activists on November 10, 1995." He goes further recalling the outpour across the world that followed the murder.
But in his definition of collaborators, Maja-Pearce argues that there were other people ready to defend Abacha. He mentions former Head of State, General Yakubu Gowon whom he said was on "damage limitation" exercise to London and Washington defending the despot.
Still focusing on that despotic regime, he lists unimaginable characters in Abacha regime. These collaborators were former Governor of Lagos State, Alhaji Lateef Jakande who took an appointment as Minister of Works and Housing, and Dr. Olu Onagoruwa as Attorney General and Minister of Justice to mention but a few of such characters.


The role of African spiritual beliefs in the build-up toward democracy as implored by the politicians forms the core of the next essay, Voodoo Democracy. Quite a list of interesting stories about late Abacha’s search for spiritual power to complete his self succession bid on October 1, 1998, the country’s independence day, flew around during those trying days in the history of this nation.
Maja-Pearce recalls the story of the hyenas and writes that four of these animals were said to have been buried alive by the dictator’s spiritual team popularly called ˆMarabous’. And what about an army of newborn mice, one thousand in all? The author touches this too. The mouths of the mice, he says were padlocked "with specially designed miniature amulet and killed them before their eyes opened." This was done to render Nigerians blind and mute while Abacha succeeds himself.


He goes further to remind us of the atrocities of the Abacha-led government that gave birth to three different killer squad: K-Squad, Strike Force and Special Squad, all entrusted with Major Hamza Al-Mustapha.

Several killings that followed including that of late Pa Alfred Rewane, wife of MKO Abiola, Kudirat Abiola and escapades of the fortunate one like Prof Wole Soyinka as well as the General Oladipo Diya’s-led alleged coup plot are analysed by Maja Pearce in this part of the book.

In this latest effort of Maja-Pearce, one is often at a crossroad on why the author feels so strong about the Late activist, Saro-Wiwa. Could Maja-Pearce’s first impression, in the late 1980s about Saro-Wiwa that "he looked more like the businessman who hobnobbed with the Generals in power, than the poet he later claimed…" be held responsible for the author’s Saro-Wiwa phobia, even at death?

He concludes the essay with the tail end of General Abdulsalami Abubakar’s transition to democracy. The author however does not exempt the new democratic attempt from his "voodoo democracy," as he accuses the international community, particular the United Nation and Commonwealth of Nations for aiding the generals – Abubakar, Obasanjo and Babangida to ensure that Obasanjo becomes the new Head of State.

Issues in the June 12 presidential election, Sharia in Zamfara and more are raised in the essay, Cannibal Banquets
In Weeping for Nigeria." The issue of sharia in the North, its constitutionality and political implication dominates the essay.
On his personal experience encountering the security operatives in Lome, he argues that, being a Nigerian did not help matters as he was detained for over 24 hours for an undisclosed offence. Probing into the human right records of the then late General Gnassingbe Eyadema government, Maja-Pearce notes that Amnesty report never favoured Togo.

Other essays in the book, In Zambia Land, Healing the Wounds, Suffer the Little Children, Kindness of Strangers, all in the second part of the book, look at political development in other African countries.

Part three of the book opens with Mr. Achebe, I Presume, an essay on the famous novelist’s 1974 work, An Image of Africa: Heart of Darkness. Maja-Pearce reviews the position of Achebe against the "problem of the European perception or misperception of Africa." This he says, is a recurring problem affecting both parties and must be resolved "if either is to learn from the other."

Other essays in that part include Calm Inside the Storm, Review of Cobra Verde, Travelling Back words, among others.
The last section, part four has only two essays, All God’s Chillun God Color and How Pinkie Killed a Man.

The first of the essay of the last part is about the author’s findings of the activities of an Islamic vigilante group in South Africa known as People Against Gangsterism and Drugs (PAGAD).
at November 11, 2015