The opening of Illimite, a solo art exhibition of new entrant, Chinedu Ogakwu, currently showing till July 13, 2015 at Terra Kulture, Victoria Island, Lagos was devoid of the usual crowd that is the trend during day-one of most art shows in the city. Ogakwu's Illimite is not the artist's first solo, but his debut in Lagos, which perhaps explains the crowd-apathy when the exhibition opened two Saturdays ago; he’s an outsider here. 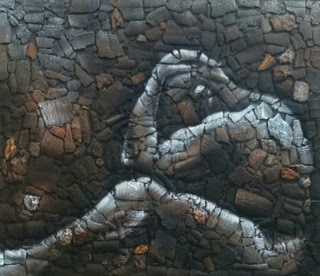 As one goes through the works, they necessarily elicit a soliloquy: Does Ogakwu's Illimite miss the usual Lagos crowd of art enthusiasts, whose presence at exhibition openings hardly generate the red tags? Apparently not, so suggest the quality of visitors that viewed the works at the opening. In fact, the red tags keep coming, indicating a successful outing for an artist who is based in Port Harcourt, Rivers State.

Viewing the eclectic displays in diverse mixed media appears like a challenge, as the works exude a high depth of creativity. Also, Illimite sounds like a kind of vocabulary that is either achieved in colloquialism or fresh from Oxford.
"Illimite is a French word for Unlimited," Ogakwu explains. Now, the diversity and group exhibition-like content of Illimite is better understood within the context of the title's meaning. As far as his palettes go, the artist attempts to delve into as many styles and techniques as possible, building on an oeuvre of a project he coined ‘As Old As Man’.

His style and technique include simple painting of mixed media on canvas; a cracking technique in collage portrait, which appears as fragile as capable of falling apart any moment; and a textured aging canvas that makes traditional impasto looks ordinary.

Some of the works on aging canvas on display at Illimite include ‘Three children at play’, ‘Busy Hand’; ‘Child looking after baby’, ‘Baby's Day Out’ and bold, daring female flesh exposures – ‘Meditation’, ‘Virgin’ and ‘Behind the Mirror 2’. For the cracked portraits, perhaps the price to pay lies in what looks like disproportionate figures, as seen in ‘Mating’, ‘From School’ and ‘Thinking Man’. But other cracked portraits such as ‘Madam Fruit Seller’ and ‘Mother 2’ are fortunate to retain a high level of aesthetic and draughtsmanship skill despite the cracking technique.

Responding to a note of similarity between his aging canvas of velvet tone and similar technique by Segun Aiyesan, Ogakwu says it is nothing to be pretentious about. "Aiyesan is my mentor."

However, Ogakwu has a stronger appropriation of his work in what looks like a work in progress. He discloses how revisiting Stone Age art has inspired most of his themes. The trajectory of "my cracked and aging canvas techniques goes back to a project I called ‘As Old As Man’." He says it’s a self-task of “bringing back art from the beginning into today’s context”.

Ogakwu's journey from the rudiment of art through a period of self-taught is shared in his Artist Statement: He recalls his fascination by art's strength in depicting "emotion, a thought or a feeling in ways more powerful than can be expressed by words."

From the self-taught background, a formal training appeared easy when he chose art as a career. "Being self-taught eventually proved to be advantageous to my development as an artist. I was able to learn unconventional ways of using various materials and develop the necessary skills for their application. Over the years my artistic process continued to develop and undergo many transformations. Initially I found plaster to be a fascinating material when I understood how to delay its drying time for several hours. I devised my own technique of applying it to various surfaces producing unique texture and style. In the past decade I became interested in installations and site-specific works."
Ogakwu obtained a Higher National Diploma in Painting at Institute of Management Technology (IMT), Enugu.