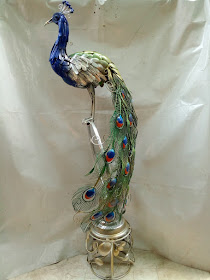 As most breeding platforms in Nigeria keep widening subjectivity of art, through the prism of the avant-garde, a three-year-old event Next of Kin refreshes the space in a more populist direction.

Understandably, the contemporary energy seems to have intimidated many young artists into the avant-garde of 'anything goes' syndrome. For the three-edition-old Next of Kin art competition and exhibition, the creative drive being exposed through its breeding platform for contemporary artists, appears like a new hope. Organised by Thought Pyramid Art Centre, Next of Kin has no space for ‘anything is art’ mentality. So far, participants, specifically, the 10 finalists, celebrate art in its basics, yet contemporary context.

Rescheduled for showing soon, the works of the ten finalists of the third edition of Next of Kin will confirm that the basics of art are still alive and strong when the artists showcase their works at Thought Pyramid Art Centre Ikoyi. Sponsored by Adeniji Kazeem & Co, Platform Capital and Nigeria Machine, Next of Kin 2020 finalists and emerging contemporary artists include Mobolaji Ogunrosoye, Hassan Abdulazeez, Waheed Ariyo, Odinakachi Okoroafor, Qozeem Abdulrahman Olaoluwa, Unyime Edet, Ojo Adewale, Christian Oluwafemi Allison, Michael Igwe and Almat Adams.

"For the 2020 edition, a committee comprising of established artists like Abiodun Olaku, Sam Ovraiti and Kelani Abass are members of the jury responsible for picking the 10 finalists," stated Ovie Omatsola, curator at Thought Pyramid. "The process towards the grand finale always starts from the beginning of the previous year, on every October when Call for Entries is announced."

A solo art exhibition to be organised by Thought Pyramid awaits the artist that emerges as Overall Winner after the grand finale, Omotsola assured.

A press preview organised for the event exposed typical fine art tradition, with the artists bringing contemporaneity as strength in their individual textures in painting, drawing and sculpture. Ogunrosoye's work, for example, celebrates the beauty of monochrome, spiced with   green leaves in a collage that appropriates complex relationship, using self-portraiture as her visual narration.

She explained her concept as “distance and separation within human relationships.” She is showing three works titled Don’t Be Shy, Where Are You Going? and Love You Sis. Ogunrosoye disclosed that her concept represents “duplicity” that depicts quite a unmber of issues. ''sometimes final element within human interactions.”

The beautiful world of birds, through the sculptures of Abdulazeez
affirms the growing dynamics of metal art on the Nigerian art space.
ln his works titled Peace, Okin Oba Eye and Hidden, the artist converges mixed media of cutlery tools with other metals to capture birds in their diverse species.

The artist explained his  choice of Yoruba themes, as being "about embracing and preserving the people’s culture and tradition for the present and coming generation.”

Another sculptor in the group, Ariyo creates pseudo-surrealism style from wood, imploring eclectic techniques to generate illusory optical effect. In works such as Prestige and Dignities of African Woman, the artist's skill in the field of chiseling could compete with mechanical reproduction.
“Twisting and interlocking random shapes to the depth of the sculptural piece from specific angles with a skillful approach,” he boasted, is his strength, which always inspires him to "create extracted forms."

Okoroafor’s canvas of figurative generated through paintings and cutouts of photographs creates collages of diverse themes of social issues. Among his works for the grand finale of Next of Kin is a piece titled Society Lady, in which he unleashes his outlining technique of stylized figurative painting. Also, in Girls Not Brides II, the artist's style of celebrating aesthetics with enriched figurative is bolder.

Okoroafor desired that his works be an inspiraction in making  significant contribution to contemporary societal discourse. And the joy of contributing to global development has always prodded him to work hard. He described himself as “a divergent artist who works with diverse materials.”

Very early in his career,  Abdulrahman Olaoluwa had created a signature of unique identity in his combination of drawing and painting technique.  His works of mostly figurative are finished in pastel and charcoal on canvas and paper. The contrast of bold colours and monochrome appears like the artist's strong expressive asset.

After his informal training in painting and industrial designs at EF ART STUDIO, under the tutelage of Agemo Francis, he is currently, into General Art studies at Adeniran Ogunsanya College of Education, Otto ljanikin.

Olaoluwa said art is a unique experience that revolves around the life of the artist and his environment.

Edet's strokes of black and white figurative work, rendered from oil on canvas and oil on chipboard, bring the natural beauty of ladies into focus. This much is expressed in two pieces titled Sensation and Resource Control, as the model’s curly African hair gets deserved attention from Edet’s smooth brushstrokes.

Edet's paintings are described as “largely characterized with human figures, especially females and infants captured with emotions, depicting the human condition with a variety of media."

Bold cubism by Adewale spiced in geometric style generates comic character-like images. Adding to the boldness in structures of figures are  bright colours that strengthen the artist's larger-than-life concept. From Omidan, a portraiture of lady in hat; to Mulik Alisa, in academic gown-like; and a musician with trumpet in action titled Music, the artist's canvas of theatrics are amazing.
"Adewale's work is full of a lot of traditional subject matters, which are often rendered in very vibrant hues,” a statement attached to his work explained.

Increasingly, hyperrealism is making a strong come-back on the Nigerian art landscape, so asserts the breathtaking  works by Allison. In charcoal and pastel on canvas, Allison captures portraiture in photo-finish technique. His work adds to the increasing energy of young Nigerian artists doing hyperrealism painting in recent years.

Formally trained in engineering, Allison is described as someone who is “constantly looking out for more ways to making his passions real.”
As the only waterclourist in the Next of Kin 2020 group, Igwe softens the gathering by caging the complex nature of the paper medium. Fluidity is the artist's strength in subtle introduction of light to his painting of mostly figuratives.

He is showing How Many Nights, including a diptych titled DaniElla, among other three pieces that celebrate subtle application of light on papers.

Igwe’s art is described as “conceptually driven process,” while the artist is noted for “a fluid and loose technique that offers everyday happenings.”

Culture, beauty and boldness of the female on canvas attract palette of Adams, specifically, in impressionism technique.
In poetic composition of figures, Adams' choice of low lighting also generates emotion, so explains her piece titled Queen In the South. Further into her feminism celebration is Admiration, which exposes a lady’s makeover table and her self-assurance gesture.

Adams' art is explained as exploring the "cultural attire of the Yoruba’s and Edo’s as well as depicting various moods.” Her interest include “creating realistic forms that is familiar but is abstracted with loosed brush strokes and vibrant colors, and ultimately creates a sense of visual aesthetic that viewers can identify with.”

For the 2020 edition of Next Of Kin, about 363 entries from all over Nigeria came in, out of which 26 were disqualified, Omatsola explained the process. "The remaining entries were divided into six batches, each containing 60 entries apart from the sixth batch that have only 26 entries." From that stage, the process arrived at 16 and further pruned to 10.

“From the selected 16 that the three jurors unanimously picked, we arrived at finalists of 10 participating artists for 2020 Next of Kin show, using the six different criteria listed above.”
-Tajudeen Sowole.